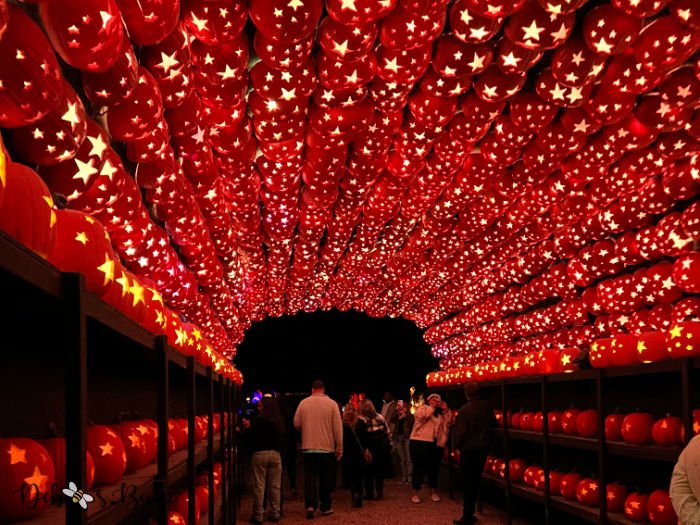 Recently, while visiting with family in Hoboken, NJ , we attended an illuminated, carved pumpkin festival. Located in the lower Hudson Valley, near Sleepy Hollow of headless horseman fame, The Great Jack o’ Lantern Blaze is a magical, immersive experience.

Since 2005, the walk-through experience has drawn more than 2 million visitors. Lighting up the night are thousands of ornately-carved, glowing pumpkins, in elaborate displays and massive light sculptures.

Today, the spooktacular event is held at two different location; both National Historic Landmarks. We visited the site at Van Cortlandt Manor in Croton-on-Hudson, north of NYC. A second site is at Old Bethpage Restoration Village on Long Island.

Featured in the fun fall festival are larger-than-life installations, synchronized lighting, and an original soundtrack of appropriately spooky music. It’s a family-friendly experience for kids of all ages, and is both stroller and handicap accessible.

Join me on a virtual walk through. Think of it as a Halloween card from me to you — boo!

Immediate family members had come together in Hoboken to celebrate our eldest son R’s engagement to V. So that both East and West Coast families could meet and get acquainted, the three-day weekend was filled with meals and activities.

It was about an hour’s drive from our son’s place to the carved pumpkin festival. Tickets are timed, with free convenient parking available; beginning 30-minutes before your time slot.

Long row of carved pumpkin skeleton figures strike different poses. Behind them is a field of gourd sunflowers.

It was a perfect night to kick off the month of October. Even though rain from Hurricane Ivan had been coming in bands throughout the day, by our 9:00 arrival for the 9:30 entry time, the weather was dry with a comfortable fall chill.

Available at the entrance (or as you exit) are seasonal refreshments and a gift tent. While waiting for our time slot, we all enjoyed beer or soda, popcorn and cider donuts. It all contributed to creating a fun, seasonal atmosphere.

Sleepy Hollow’s Dutch history dates back to the 1600’s, when it was part of the New Netherlands Colony. Celebrating the carved pumpkin festival area’s time as a Dutch enclave, was a windmill and field of tulips.

I can’t wait to visit the Netherlands for tulip season next April! Originally, we were supposed to take the river cruise this past spring, but the pandemic upended our plans.

Each Blaze features intricate light sculptures and landscapes built entirely from lit, ornately carved pumpkins.  For this year’s event, teams of artisans hand-carved more than 7,000 real and faux pumpkins! Most had some kind of fireproof, translucent liners inside to enhance the interior lighting.

Yearly fan favorites — like the Pumpkin Bridge, Headless Horseman, Pumpkin Planetarium, and Statue of Liberty — are reconstructed, along with a rotating assortment of new designs.

Recent additions include a New York cityscape and jellyfish walk-through, as well as upgraded galleries of pumpkin masterpieces and dinosaur skeletons. New this year is an animated “Jack” Smith working in his shop, and a hive of glowing bees.

I was mesmerized by the sea of brightly colored jellyfish. In the background is a glimpse the NYC skyline display.

R and V visited the carved pumpkin festival for the first time last year, and thought 40-50% of the displays were different from the previous Blaze.

Most of the sculptures and displays appeared to be made of longer-lasting, artificial “funkins.” However, there were still plenty of fresh jack o’ lanterns throughout the carved pumpkin festival.

Towering, 24-foot spider web surrounded by a clutter of spiders.

Carving funkins starts in earnest at the end of August. Artist continue carving real pumpkins throughout the run of the Blaze event, replacing about a thousand pumpkins every week! That’s a lot of seeds and guts lol! Gourd entrails, carved scraps, and “retired” pumpkins are all composted for the gardens at Historic Hudson Valley sites throughout the region.

Near the start of the winding path was one of my favorite displays at the entire carved pumpkin festival.

The Museum of Pumpkin Art included recreations of several famous paintings, including the Mona Lisa. Each was made from a grid of carved pumpkins, with the Headless Horseman appearing in the background of each canvas.

Walk in the Woods

The walking tour, is said to last about 45 minutes or so, depending on your pace and where you stop for photos. We spent about twice that, but that included hanging out near the refreshment tent before and after.

At times, the narrow, winding pathway could get a bit crowded as it climbed up and then down the hillside. Once in awhile, we’d pause to let large families or groups pass by, so we could take pictures, or just absorb the enormity of a sculpture and scene.

Giant sea serpent swimming in wavy blue sea. A revolving carousel of animal skeletons is in the back right.

That included a full-scale, working pumpkin carousel! It was designed by a modern-day descendant of one of this country’s very first carrousel makers. What made it so frightingly fun, was the horse, giraffe, zebra and other animals going up and down were all skeletons. Unfortunately, between the movement, lighting and fog machines, my photos are not blog-worthy to share.

Most mesmerizing of all, was the infinity path of jack o’ lanterns going endlessly into the haunted woods. Wicked!

Not every sculpture or scene was colossal in size. There was so much to see — including trying to focus on small details of the intricate and clever pumpkin carvings all along the path.

Other spellbinding displays included a trio of witches casting a spell around a smoking cauldron. Or, the medieval knights and unicorn in another section. Nearby, two fireman were climbing a latter to rescue a cat in a tree. Another poor fireman, with his animated firehose attached to a pumpkin-carved hydrant, was repeatedly attempting to put out a smoking bonfire.

Further up the hillside, was an entire area devoted to menacing, live-sized dinosaur skeletons. It was the only area that backed up. Clearly a kids favorite, there was lots of posing for pictures with the dinosaurs.

Enormous t-rex dinosaur with flying pterodactyls in the background.

In addition to the huge size of the glowing creatures, several were animated. Included in the displays were pumpkin carved dinosaur tracks and Jurassic era ferns.

Further along, was an extensive section of the carved pumpkin festival dedicated to nearby New York City.

Not only was there a NYC skyline, but also a cab, people on a park bench, and other iconic images of the city that never sleeps.

Tick, Tock, Time is Running Out

The Blaze event is set against the mysterious backdrop of Van Cortlandt Manor’s 18th-century buildings and riverside landscape.

Enormous grandfather in field of mice carved pumpkins reminds visitors their time is running out — eeek!

As the path passes the mansion, in turns and heads back down the hillside, past a giant filed of sunflowers and through a spooky cemetery.

Finally, a perennial favorite of the carved pumpkin festival is an ever evolving display dedicated to The Legend of Sleepy Hollow.

In Washington Irving’s 1830 short story, newly hired schoolmaster Ichabod Crane revels in local ghost stories. Ichabod is particularly enthralled by the tale of the Headless Horseman — ghost of a Hessian mercenary soldier from the Revolution, whose head was blown-off by a cannon ball.

Headless horseman rises from his grave in the cemetery and gallops down the hill.

At night, The Headless Horseman gallops around Sleepy Hollow, searching for his head, to return to his grave in the churchyard at dawn.

I loved that scary tale when I was a kid, and the extensive display did not disappoint! First was a clever lighting animation that made it appear as if the headless horseman was galloping out of the graveyard, and down the hill towards the covered bridge.

More than 1,000 volunteers help scoop, carve, and light the pumpkins, with single jack o’ lanterns hand-carved on site by a team of professional artists. Aren’t the results amazing? Can you pick a favorite?

Photo Credits: Most of the photo credits go to my youngest son, D, who served as my camera man at the carved pumpkin festive. We were both anxious to see how the camera on his brand new iPhone would work, taking pictures of illuminated pumpkins in the dark with fog. The rest were a mixture I and other family members shared.

Earlier in the day, we all headed into an area of NYC called DUMBO (Down Under the Manhattan Bridge Overpass). Although the riverfront area is is one of the most-visited spots in Brooklyn, hubby and I had never been there before.

There, the eight of us broke into two mixed family teams for an over-the-top escape room and bonding experience, called Beat the Bomb! It’s like stepping into a real-life video game. R and V had done it before as team-building experiences for their firms. Hubby and I had done an escape room over Thanksgiving in Charleston. But that was primarily mind games and solving puzzles.

Beat the Bomb is marketed as a next generation, immersive group entertainment experience. During one-hour missions, teams of four to six players suit up in hazmat gear and advance through a series of five high-tech game rooms. Points are collected for crucial extra minutes on the clock to defuse the bomb at the end.

Well, neither team beat the bomb and got sprayed with paint! But what a blast! Most fun was the Laser Maze, even if we had to crawl across the floor on our bellies several times, (“get your butt down mom!”) lol!

Afterwards you can view videos and photos of teams getting splashed with paint (and the company emails free links to view at home). Apparently, they just added a Bubble Bomb experience option, and are opening a second location in Atlanta.

Just down the street, V’s mother treated us to an amazing family-style dining experience at an excellent Vietnamese restaurant. There we all had lots of fun, laughing and teasing over our shared experience.