How to Make a Floating Teacup Centerpiece 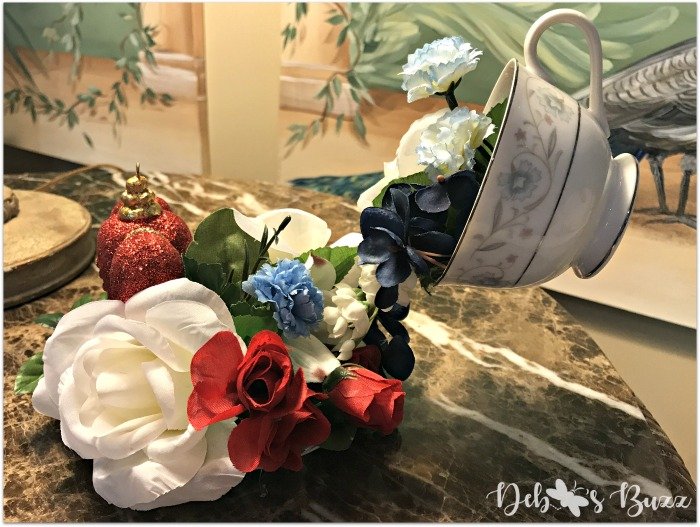 Back in May, I shared an Absolutely Mad, Summer Tea Party Table. Included in the centerpiece, was a floating teacup floral arrangement. Actually, there were three — because three’s a charm, right? 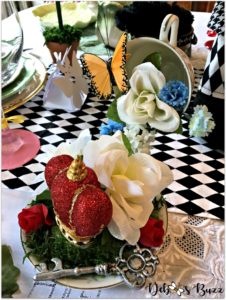 Several readers asked me to share how I made them.

While planning the Alice in Wonderland, Unbirthday Party, I went to Pinterest for creative inspiration. That’s where I first saw images of floating teacup table decor. “Magically” appearing suspended in midair, a teacup spills a colorful cascade of flowers into the matching saucer below. Perfect to delight guests at a Mad Hatter’s tea party!

Most of the floating teacup pins linked to Etsy shops. One led to a blog post depicting images of the crafting steps, but lacked any text or instructive details.

So, I decided to figure it out myself — via trial and error. It is a little tricky to make a floating teacup. But, I’ve made the process much easier here; by breaking down the steps and providing a descriptive tutorial.

Recipe for a Perfect Cup of Tea 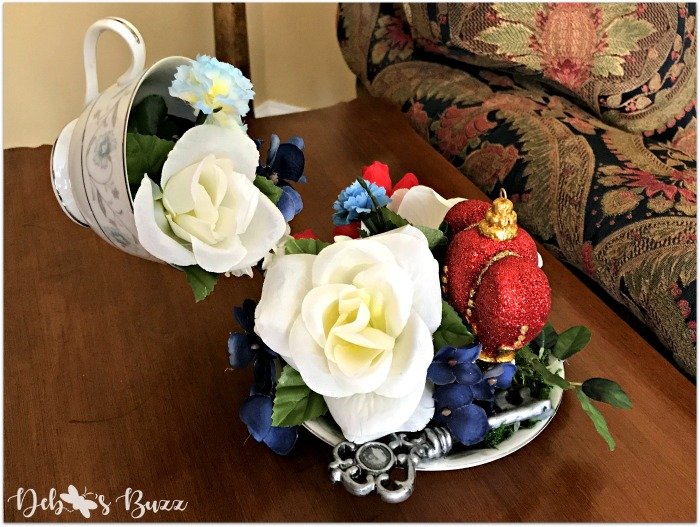 Before we start, a little background. I crafted the centerpieces about 18 months ago for a My Favorite Things Party with an Alice in Wonderland theme. Fortunately, I had taken step-by-step pictures when I crafted the floating teacup. To find the photos, however, I had to search through thousands of images! That’s why it took me so long to create this tutorial.

Since I wanted multiple arrangements, I worked on three at a time — in a sort of assembly line. But, the process works if you are making only one or many centerpieces; say for a small shower or large fundraising event. And, the floral arrangements would work for any type of tea party; mad or otherwise!

Before assembling a floating teacup centerpiece, you’ll need to gather together the necessary ingredients: 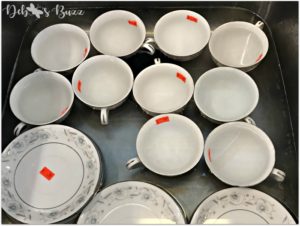 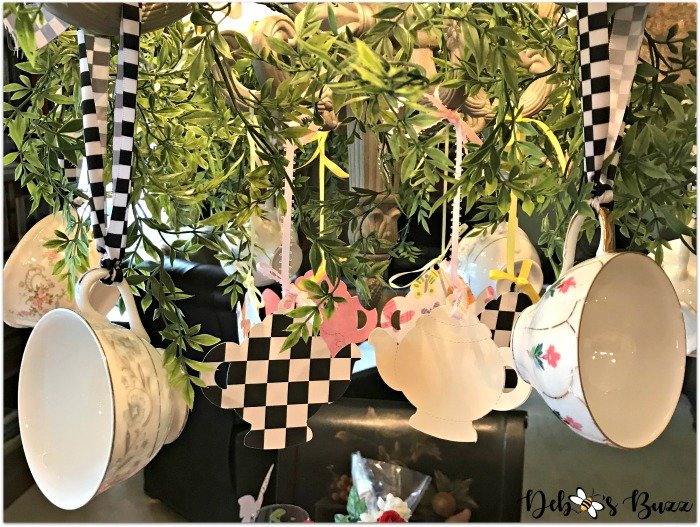 A few of the teacups were used with other vintage patterns to decorate the chandelier for the Wonderland theme party. English Garden is the teacup to the far left. More hanging than floating teacup!

Of course, you can use any teacup and saucer. It doesn’t have to be china or vintage. Even though the saucer will be virtually covered in the arrangement, the teacup will be the star. 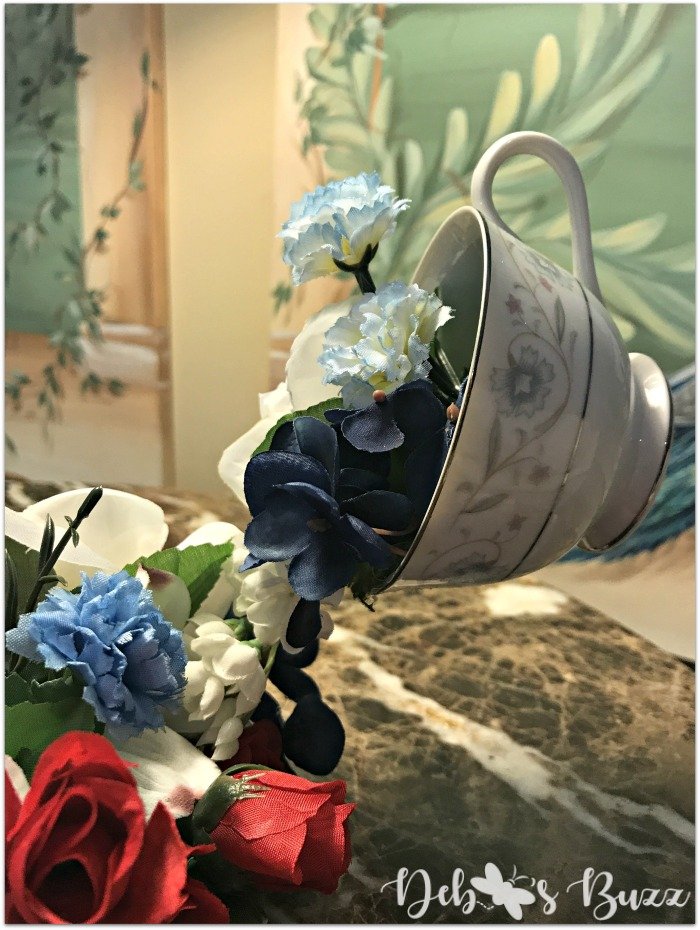 So, I recommend using a teacup with an interesting shape and handle. Maybe you had a grandmother or aunt who collected teacups that are packed up in a box or collecting dust somewhere? Even with a small chip in the rim, you could probably hide the flaw with florals. 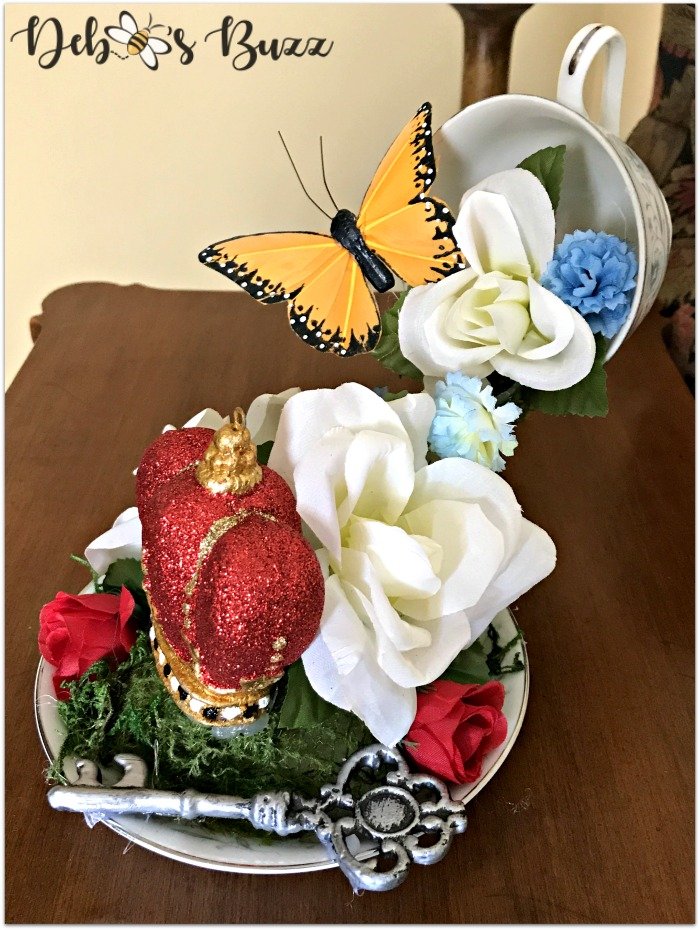 However, you don’t want to use any china that is very valuable, or that you’d be heart-sick if it got damaged.

A dinner-size fork, with large tines, is the underlying support that holds the floating teacup above the saucer. Did you already figure that out for yourself clever reader?

Any ‘ol fork will do, as very little will be visible when the project is finished. I bent mismatched, vintage silver forks as shown below. Seemed like an appropriate reuse for them. 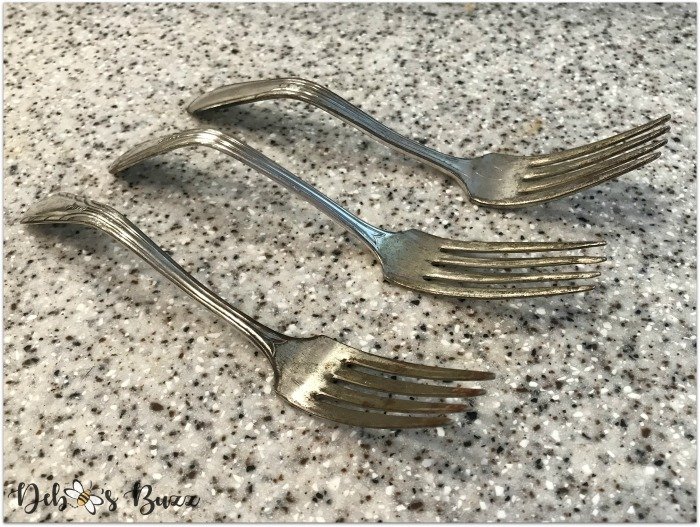 Bend each fork at the top and bottom as shown above. Flatten out the tines as much as possible.

Afterwards, I realized I probably should have bent each fork at a steeper angle. But, it took a good amount of force to bend the forks, and I didn’t want to break them or impale my hand with a tine!  I did remedy the problem by adding a counterweight, which I’ll explain later.

I used E6000 glue to attach the fork to the china, because it supports heavy weights, is good with a wide variety of materials, and dries clear. 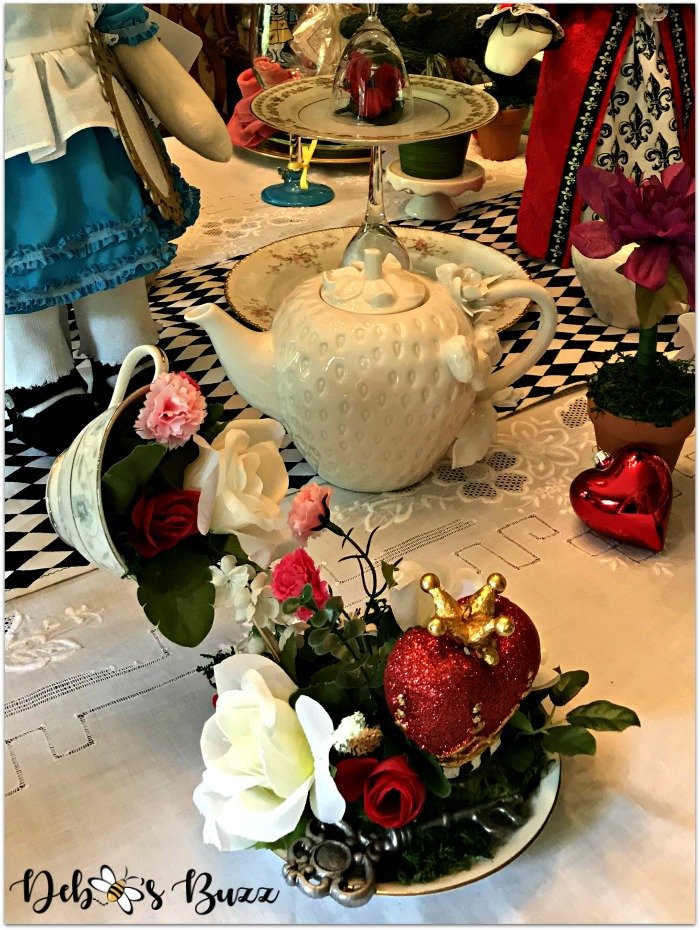 It’s the same glue used for the DIY Vintage China Server seen above, behind the floating teacup arrangement. E6000 is powerful stuff, so be sure to work in a well-ventilated area. 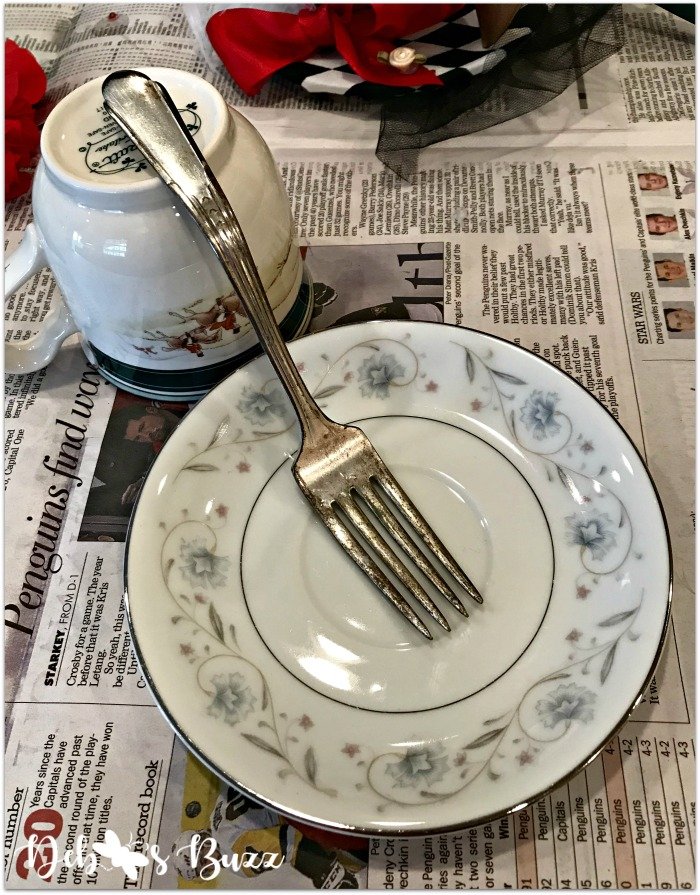 Begin, by finding an object to support the fork in place while the glue dries. Spread a liberal amount of glue in the indentation of the saucer. Then place the fork into the glue. Once you’re sure you have the fork well-positioned, add enough glue to completely cover the fork tines and edges.

Check back in an hour or two and apply more glue if necessary. Let dry overnight.

A teacup from my everyday dishes turned out to be just the right height to support the fork, while sitting flat on the saucer. 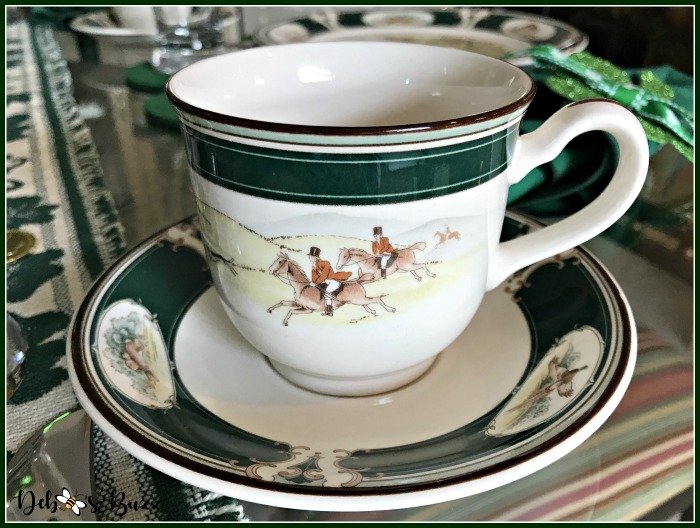 Regular readers may recognize the Ireland Pursuit pattern from Casual St. Patrick’s Day Table. However, it’s not a cup and saucer set I’d ever consider using in a craft project!

This is the most challenging step to making a floating teacup. Gluing is the easy part. What’s difficult, is supporting the darn teacup and fork handle in the right position while the glue dries. 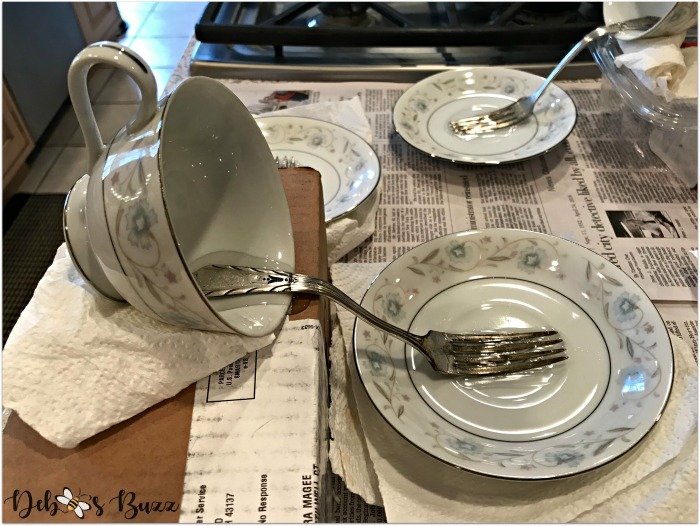 I tried a number of objects before I found the right height and angle. There are two factors to deal with. First, the teacup is a curved edge and you want the fork handle to lay as flat as possible inside.

Second, glue will run and drip, so don’t use anything for support that isn’t disposable. What worked for me was a combination of disposable food containers, cardboard boxes and paper towels. 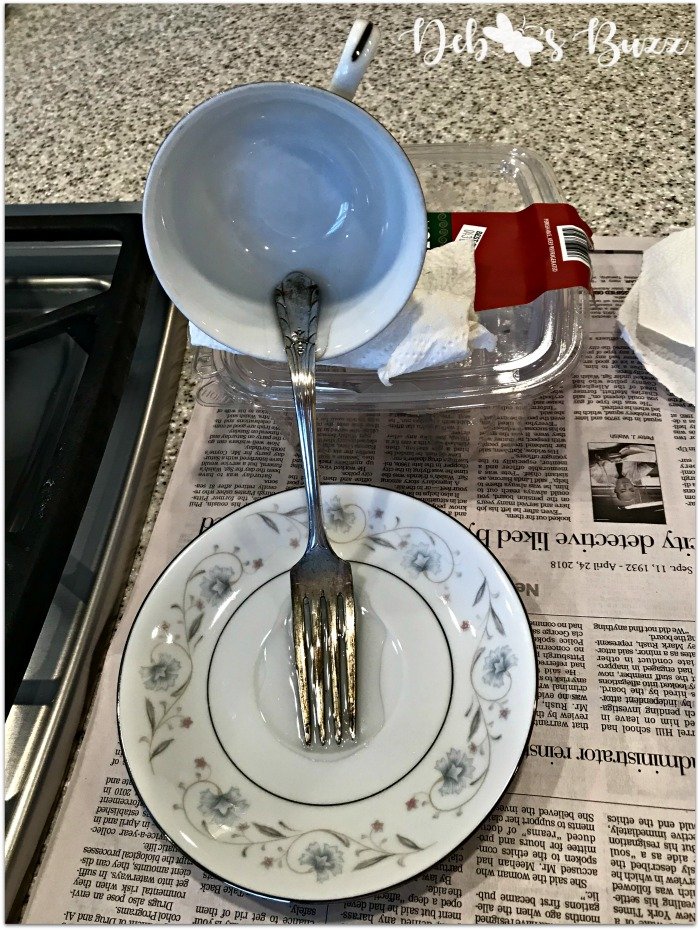 And, for visual interest, slightly turn the teacup handle to one side. 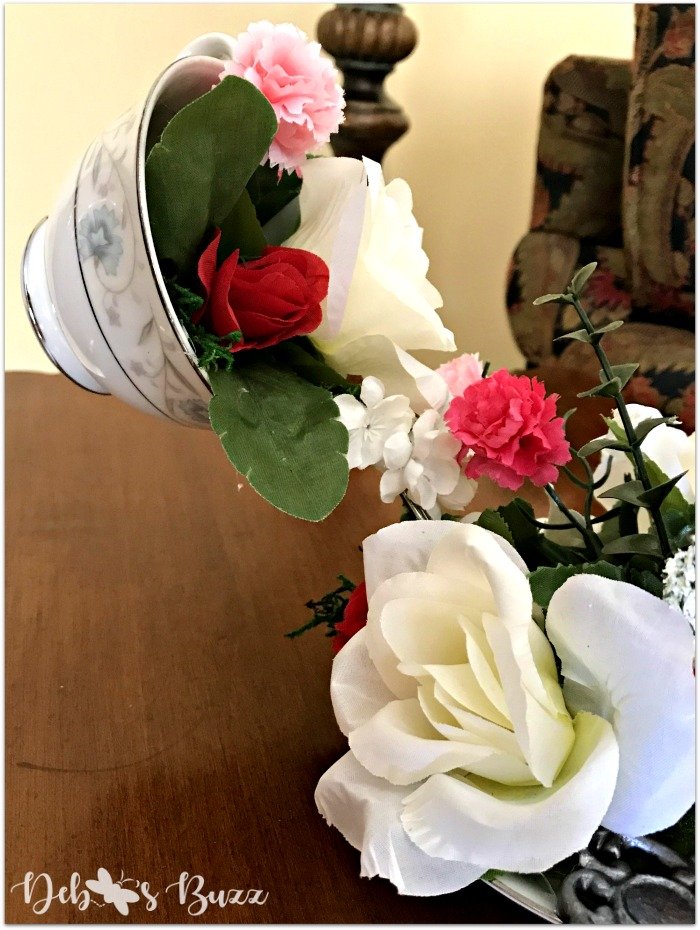 As with the saucer, place a puddle of glue on the inside of the teacup. Then position the handle in place. This is where I found the paper towels helped to get a snug fit. Let the glue set-up a bit, before covering the top of the handle. Dry completely overnight. 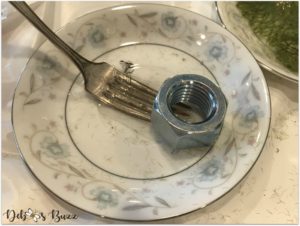 After removing the supports, I was distressed to find the floating teacup tipped over! Not to worry though, I caught it right away. The weight distribution and balance was off. Instead of floating, the centerpiece wouldn’t stand on its own.

Perhaps if I had more steeply bent the fork handles in the beginning? This is the part no one explained or showed in any of the pins or posts I found.

Off I went to our local hardware store for something I could use that would provide counterweight. The washers, or whatever the hardware is called, weighs much more than the china. I’d guess about pound or more. At about a buck or two a piece they saved the day! 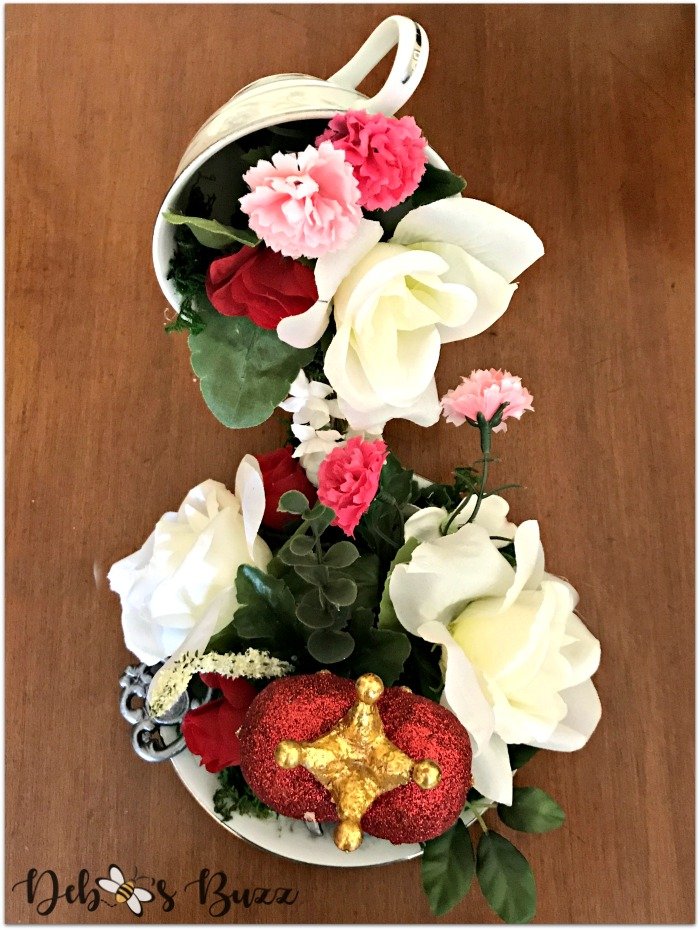 Not only did the hardware provide balance for the floating teacups, but they added a lot of stability as well.

To camouflage the counterweight, I covered it and the fork with a strip of moss. 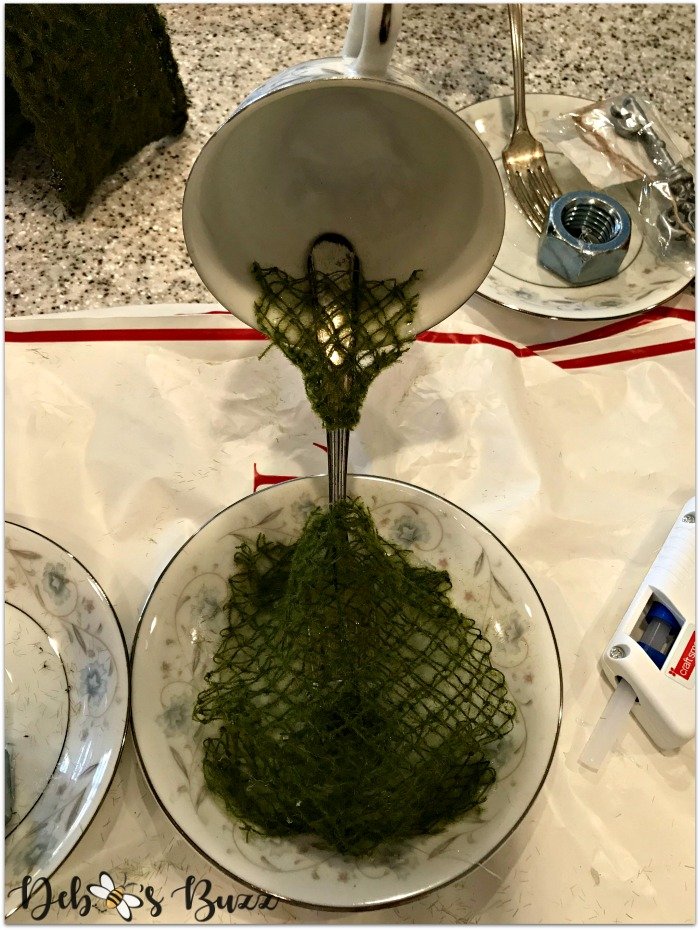 From this point forward, I used a hot glue gun rather than the E6000.

Now for the fun part! Decorate with flowers and whatever floats your  teacup, LOL!

Because I was holding an Alice in Wonderland theme party, my embellishments tied to elements in the storybook — a large key, white and red roses, and a crown. I looked for small pocket watch embellishments at craft stores, but came up empty. A Queen of Hearts playing card would be cute too, but I used that in my fascinator for the party. 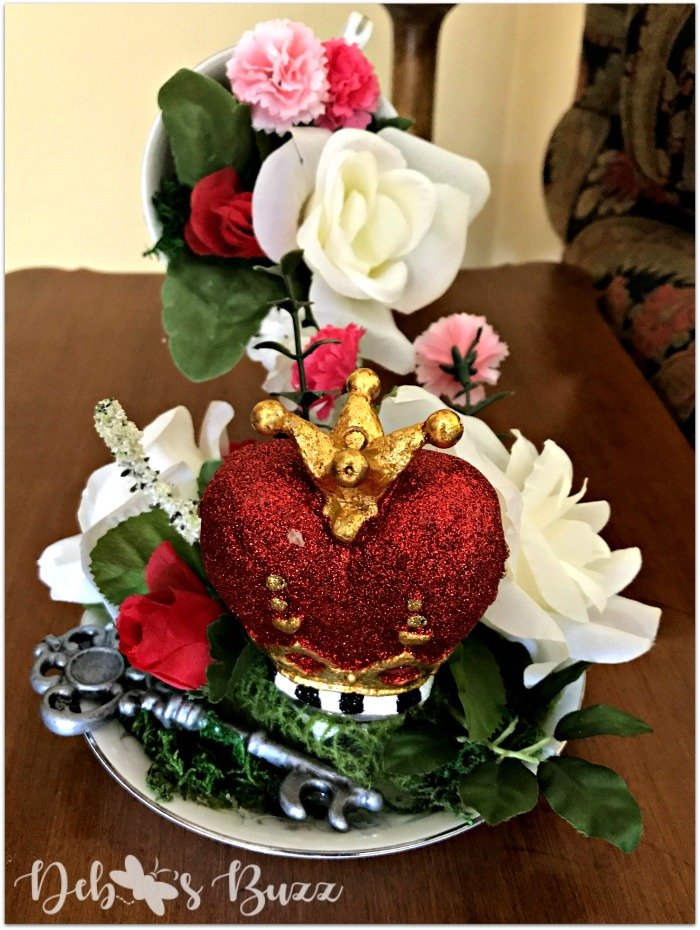 Most of the flowers and embellishments were leftovers in my craft stash, or from other DIY party decorations and favors. 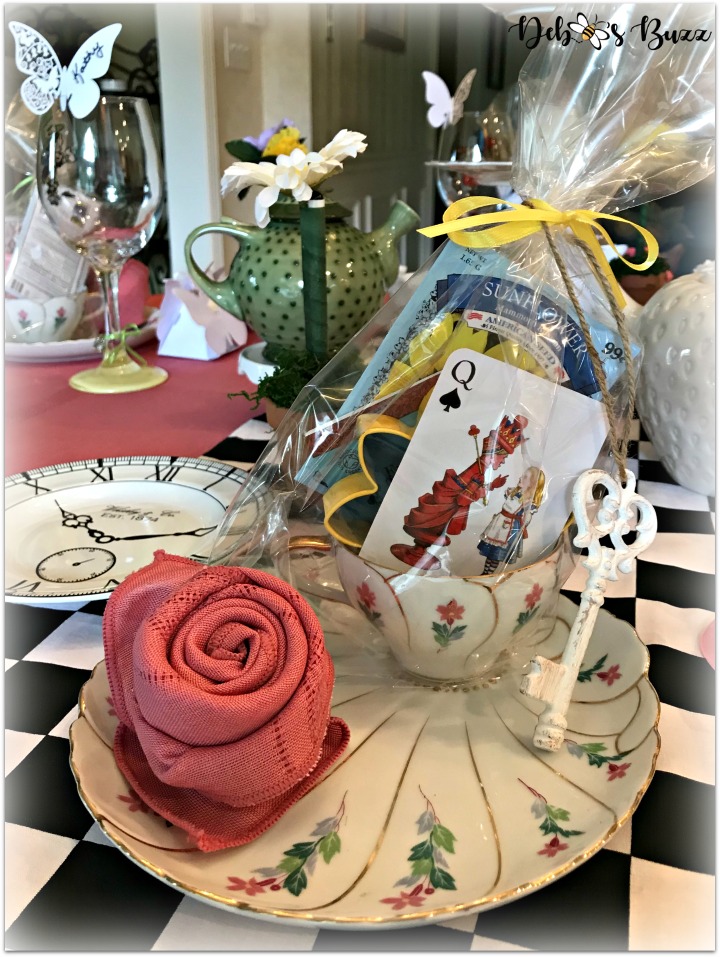 You might have caught glimpses of them in Alice in Wonderland Party Favors and Fanciful Wonderland Wreath. 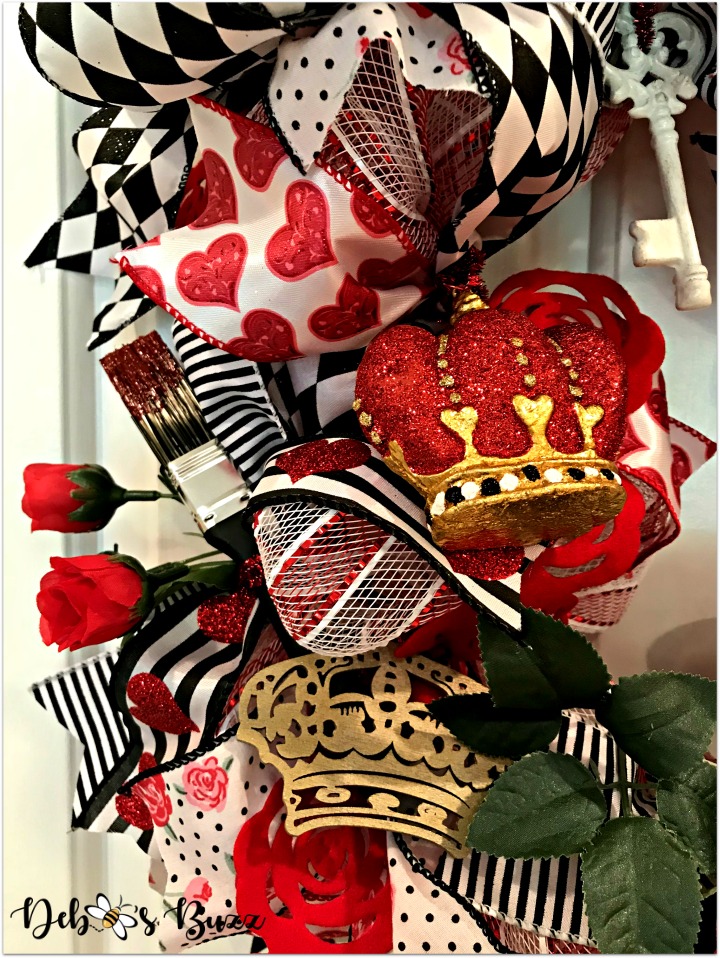 Bee sure to check out all the tea party theme party posts and other DIY projects, like How to Make Whimsical Teacup Fascinators. 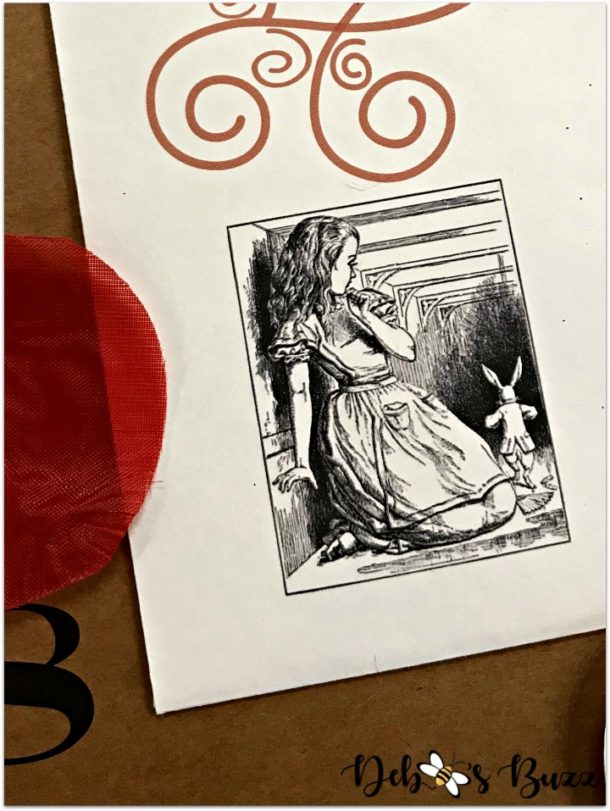 If you’re not a crafter, but would like a floating teacup to decorate a table or give as a gift, I’ve just added all three to my Etsy shop, DebbeesBuzzBoutique. 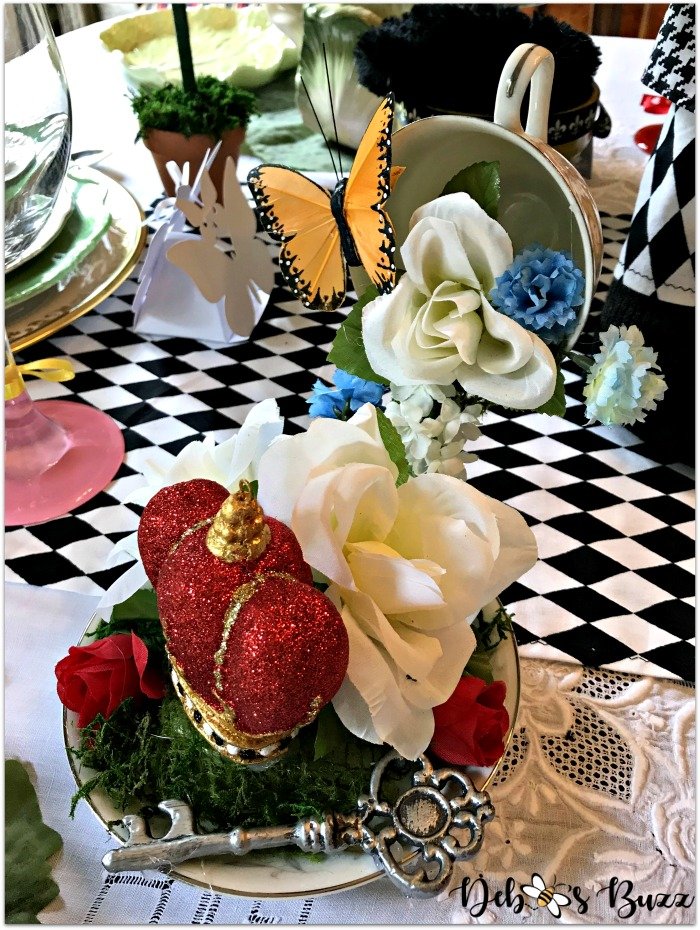 The last week, I’ve been working on two new theme tables. For the August tablescape hop, I’ll be sharing an outdoor Palms & Paradise Tropic Table. And, in the next week or so, I plan to show you the olive-decorated linens I found in Athens, for It’s Greek to Me. 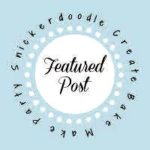