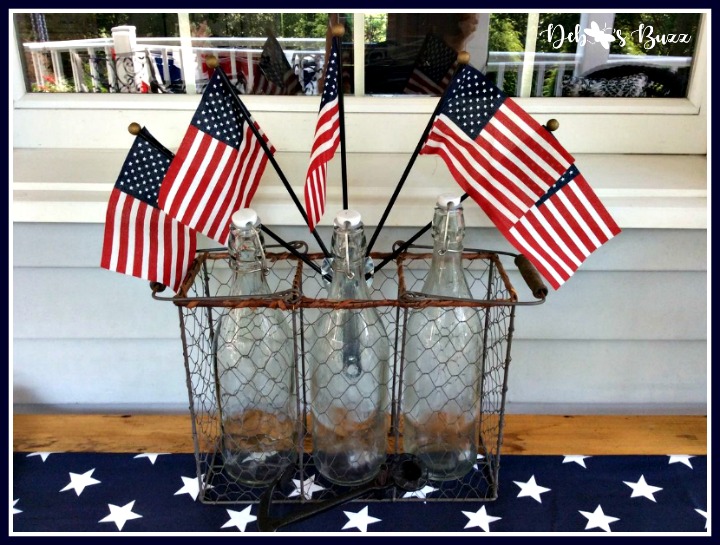 I want to wish you a happy July 4th, by sharing old-fashioned Independence Day decorations around my porch. 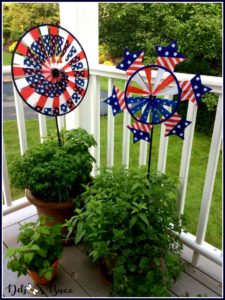 Because I’m still putting Alice in Wonderland, Unbirthday Party decorations away, and since it’ll only be hubby and I celebrating July 4th together, I elected not to bedeck the covered porch in traditional bunting this year.

Let me show you how I typically celebrate our country’s birthday, with pictures from years past. 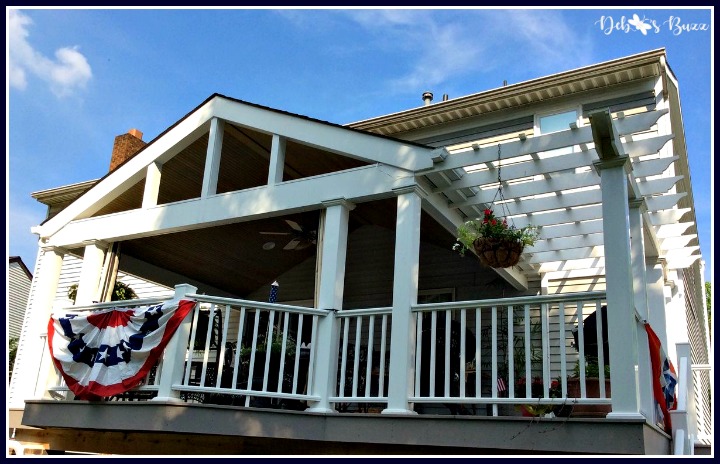 Our covered porch is about 11 years old; replacing a much smaller deck with no roof or stairs. The addition has a grey and white color scheme, with three support brick pillars that match the house, a pergola and set of stairs. Here you can see the balcony bump-out bay draped with traditional bunting. And, if you look closely, you can see more bunting on the far right side railing next to the stairs.

There’s also more bunting on the stair landing and far left side of the porch. I like to think it looks a little like a gazebo in a little town square, just waiting for the band to strike up a John Philip Sousa tune. Can you see it? 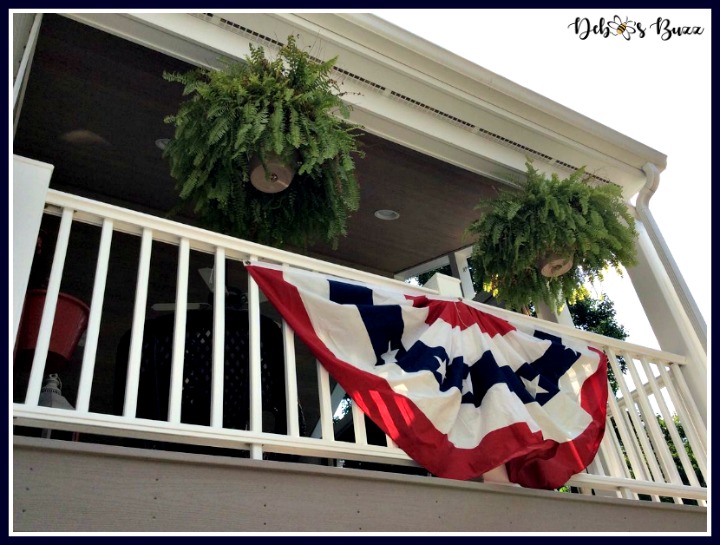 This side of the porch faces our driveway and is also decorated with bunting. I just realized these last few pictures are dated, because the ferns have been planted in large iron planters for several years now. And, the honeysuckle vine growing up the brick pillars covers half of the pergola.

Potted herbs on the porch, under the pergola, are embellished with festive pinwheel Independence Day decorations.

There are also a number of large pinwheels in various styles scattered around the landscaping in the front of the house. I love the motion and “click-click-click” sound they make. All of the pinwheels were found at either Hobby Lobby or Michael’s. 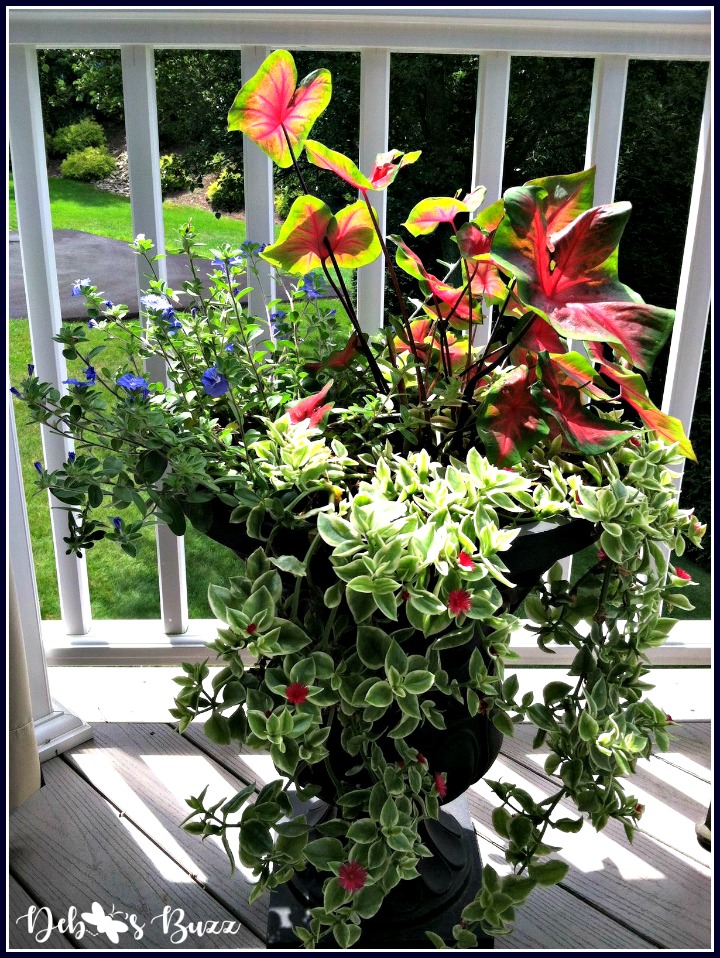 Most years, I plant red, white and true-blue annuals in urns on the deck. Even Apollo gets a little red July 4th color. 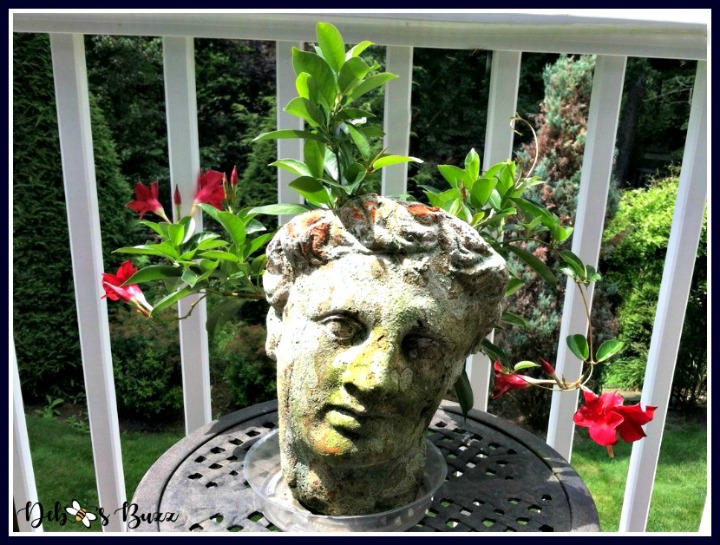 The Apollo planter is a happy reminder of our Visit to Amazing Ancient Athens, Greece— birthplace of many of our democratic principles. 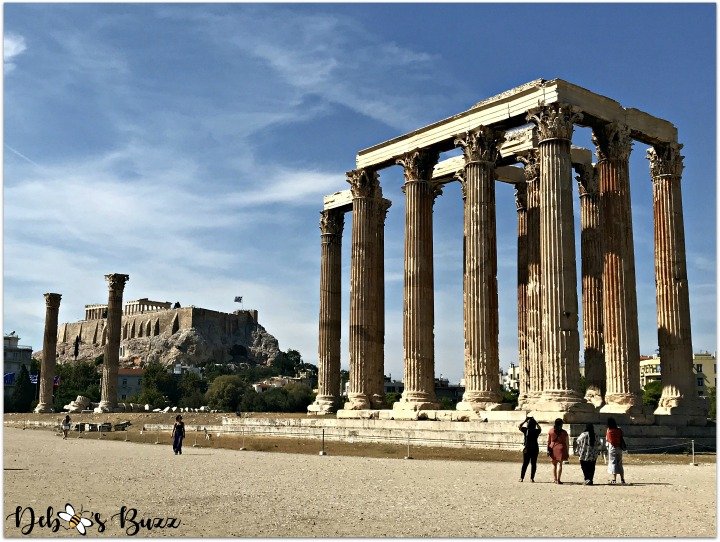 For Independence Day decorations, I go a little crazy sticking flags into all the planters — even the hanging ferns.

More recently, I’ve also incorporated metal fireworks on stakes, like those seen below.

The porch is furnished in black iron and wicker, to create contrast against all the white railings. Ceiling and floor are gray. Here you can see the black and white striped Sunbrella drapes framing the balcony bump-out. 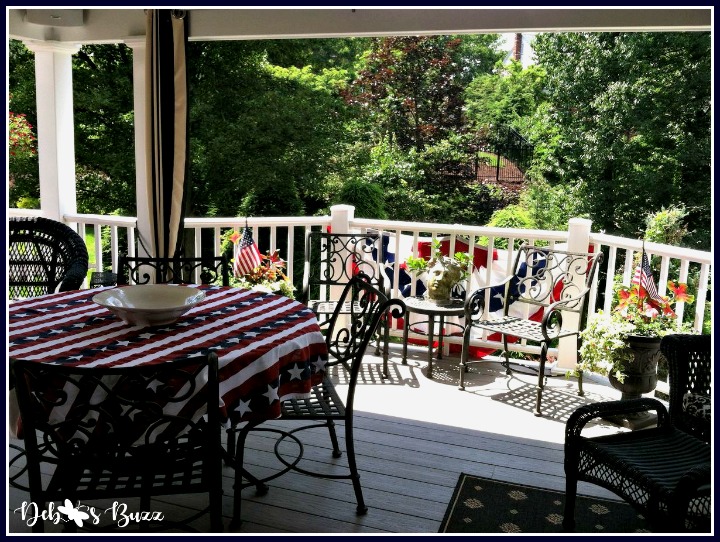 The drapes are for both function and design. Despite the large roof, there are times of the day (particularly around dinnertime), when the sun’s angle hits your right in the eye.

The curtains solve that problem, cutting down on the glare and heat. I got the panels through Ballard Designs (along with an outdoor rug), and they’ve held up great! Money really well spent. 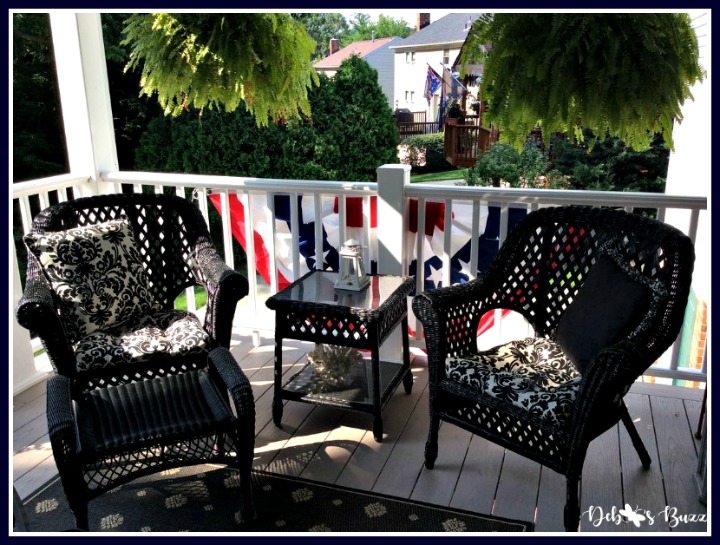 Black and white cushions and pillows tie-in with the curtain panels. Fibber blends right in.

That look tells me he isn’t going to be giving up his seat anytime soon!

Red, white and blue coastal décor, and Independence Day decorations and accents are scattered around the deck. 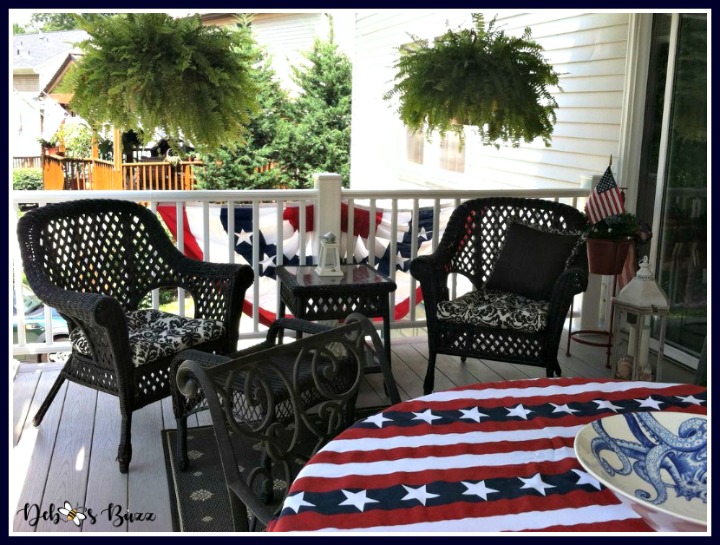 See the outdoor table for July 4th in Give Me Liberty Blue Tablescape. 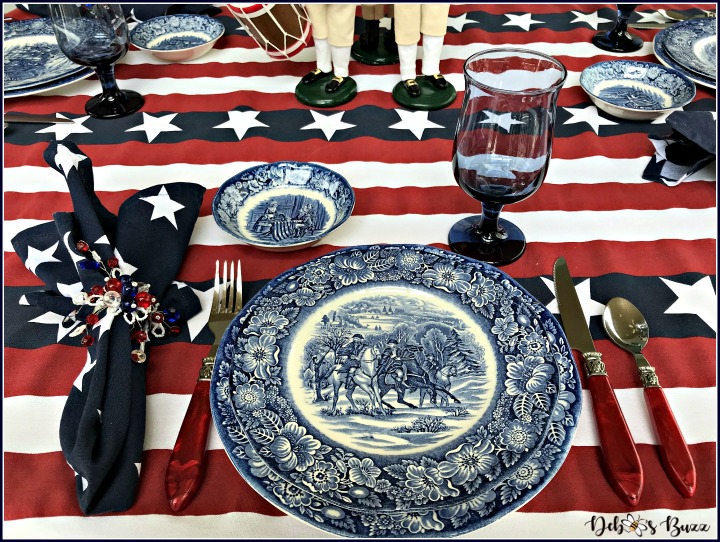 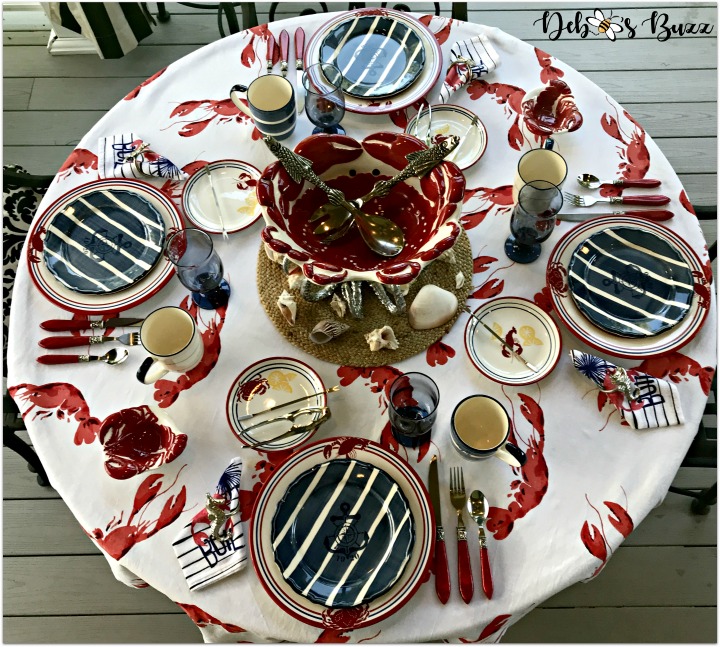 Do you decorate for July 4th? 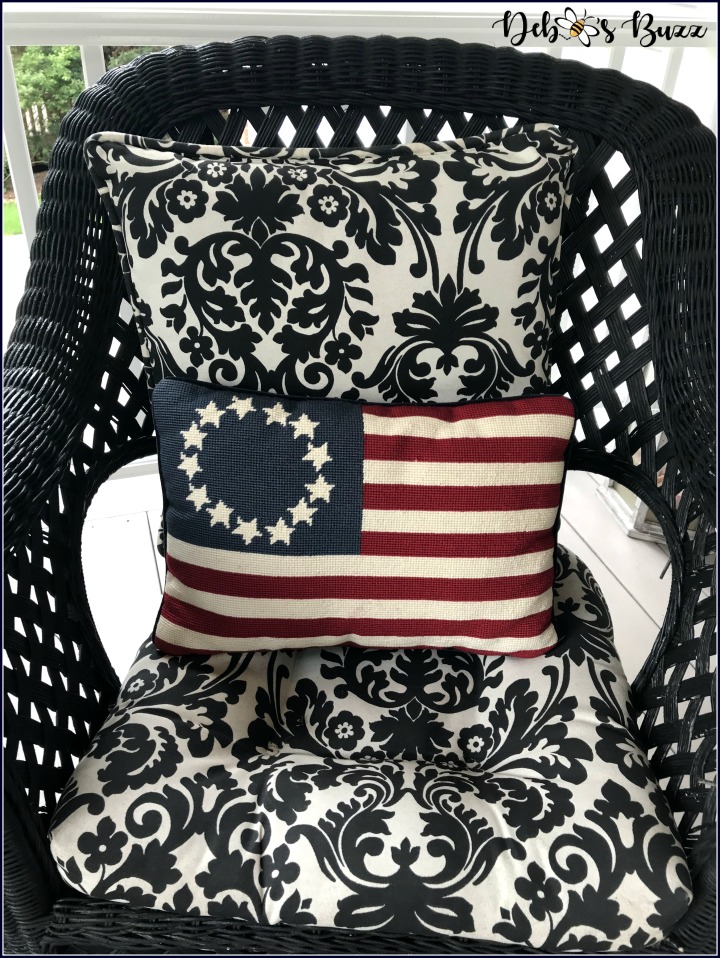 I also add Independence Day decorations to the antique wallpaper table used as a buffet. The flag fan below is designed to be attached to the side of a mailbox post.

That and the tea-stained flag garland below, come from one of my favorite places to shop. See Perusing at Old Allegheny Shoppe). 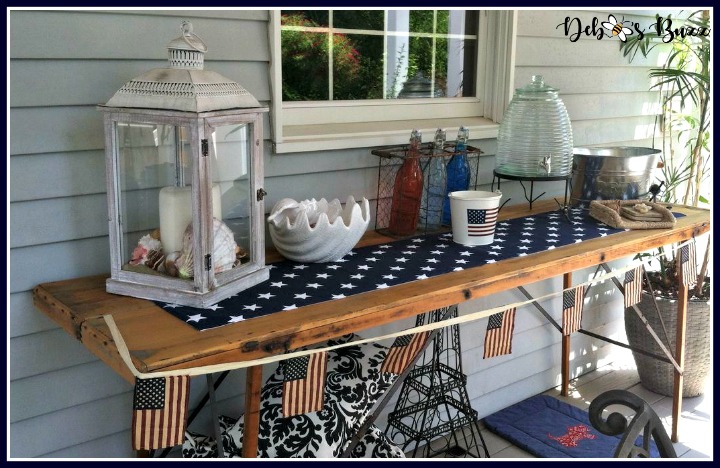 Oh dear, a hodge-podge of coastal and Independence Day decorations, servers, extra pillows and even Fibber’s dog mat, seem to have accumulated on and under the wallpaper table. Excuse my clutter! 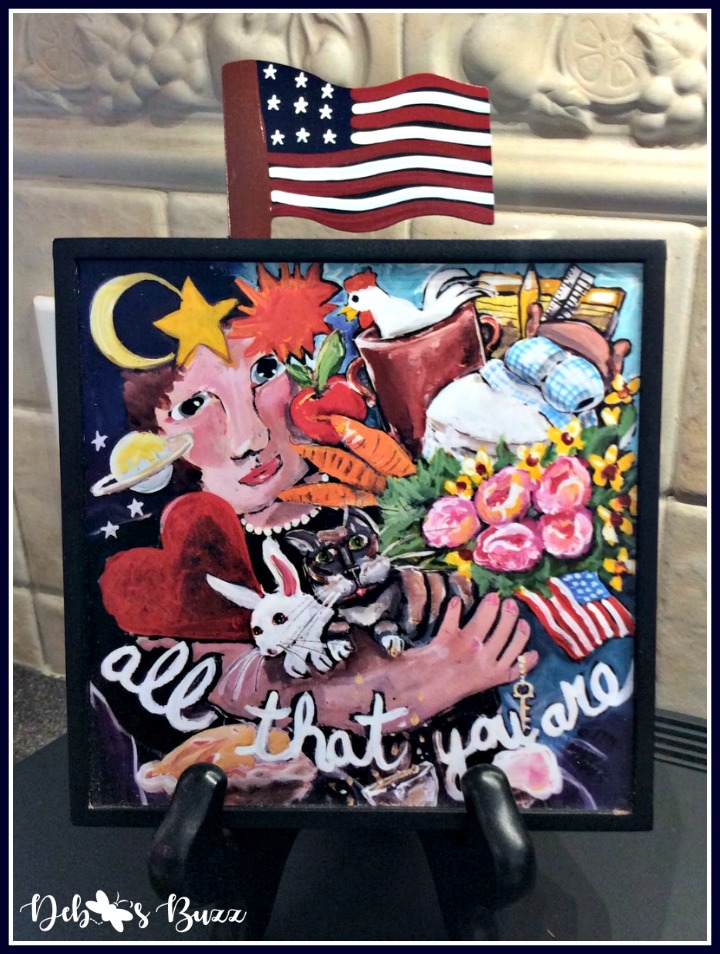 Here’s a Nancy Thomas piece my sister bought me when she lived in Yorktown, VA. It’s another reminder of hubby’s Revolutionary War ancestor, Peacock, who was present at Cornwallis’ surrender all those years ago.

I hope you’ll join Betsy Ross, Paul Revere and I for a July 4th Patriots Table later this week. 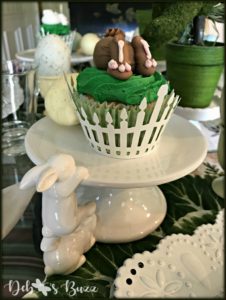 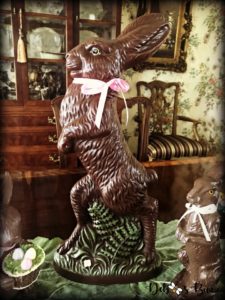 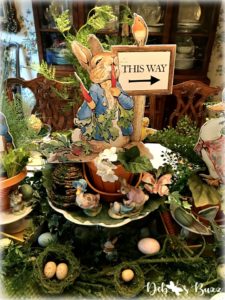 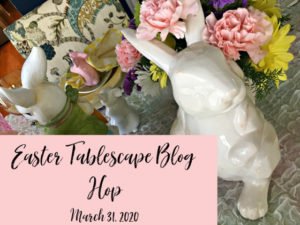 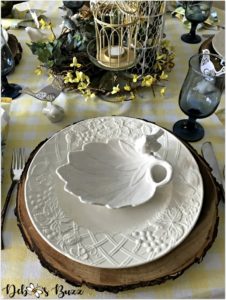 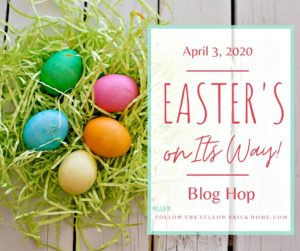 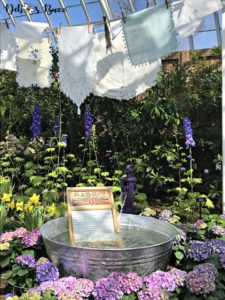 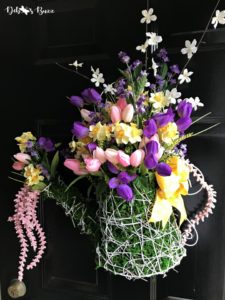 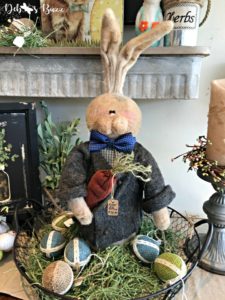 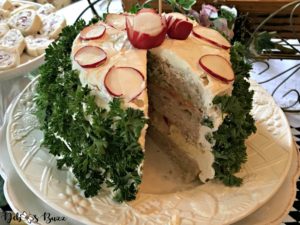