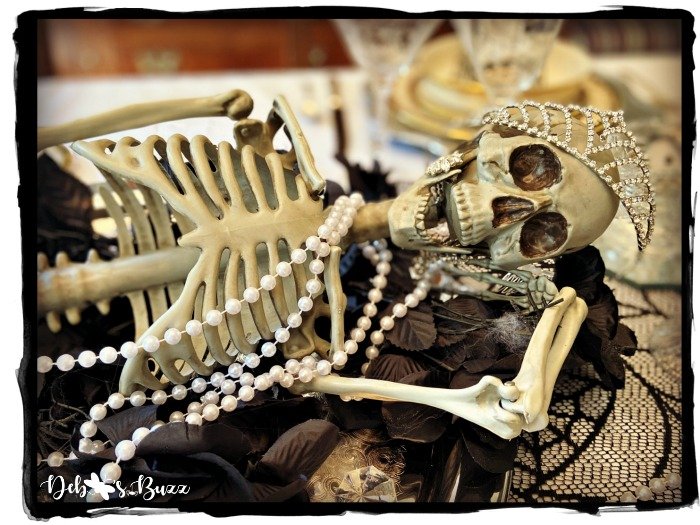 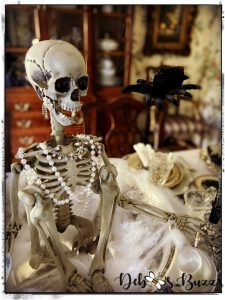 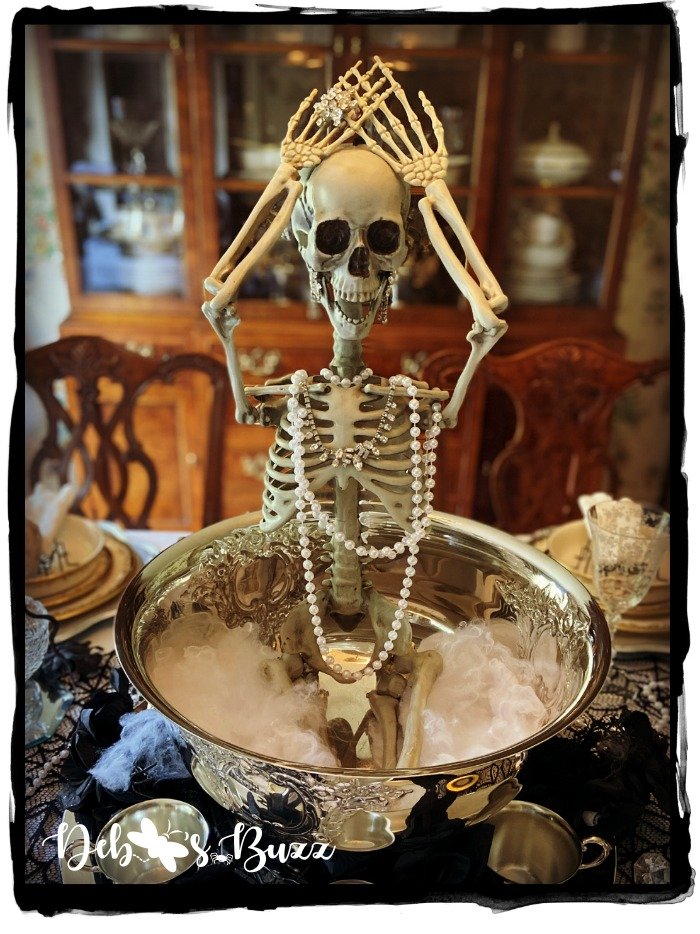 After being packed up  in the attic for a year, maybe Stella just needed to stretch out and shake off the cobwebs?

Is there such a thing as skeleton yoga positions? 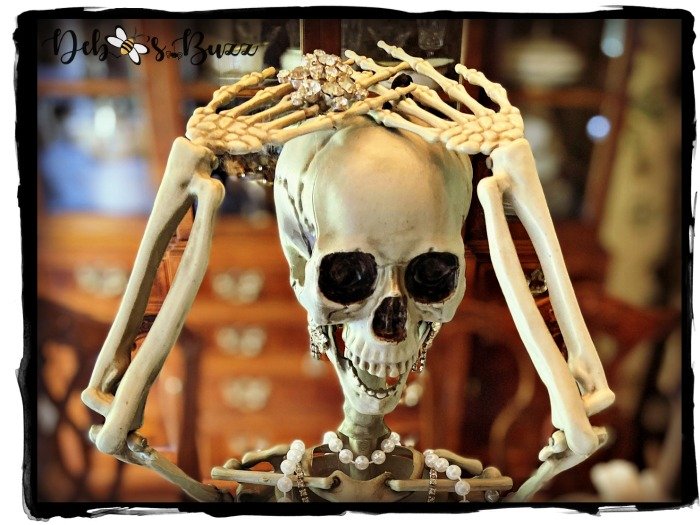 Or, maybe she was just trying to keep the huge spider — dangling from the chandelier — from landing on her head? 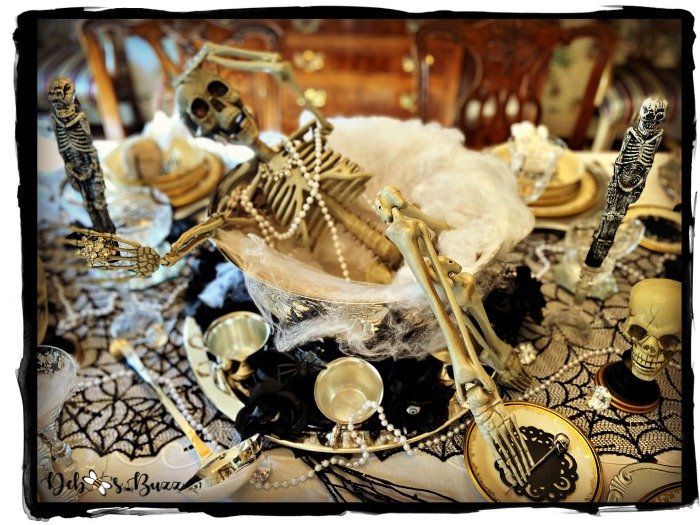 After sitting up in the punchbowl, Stella took an “oh woe is me” pose; lounging back in the smoky brew. 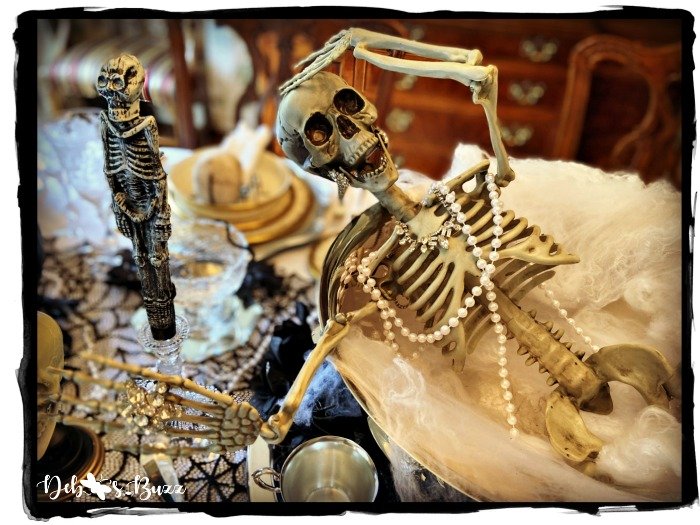 Or maybe she was just having a hearty laugh at my expense? 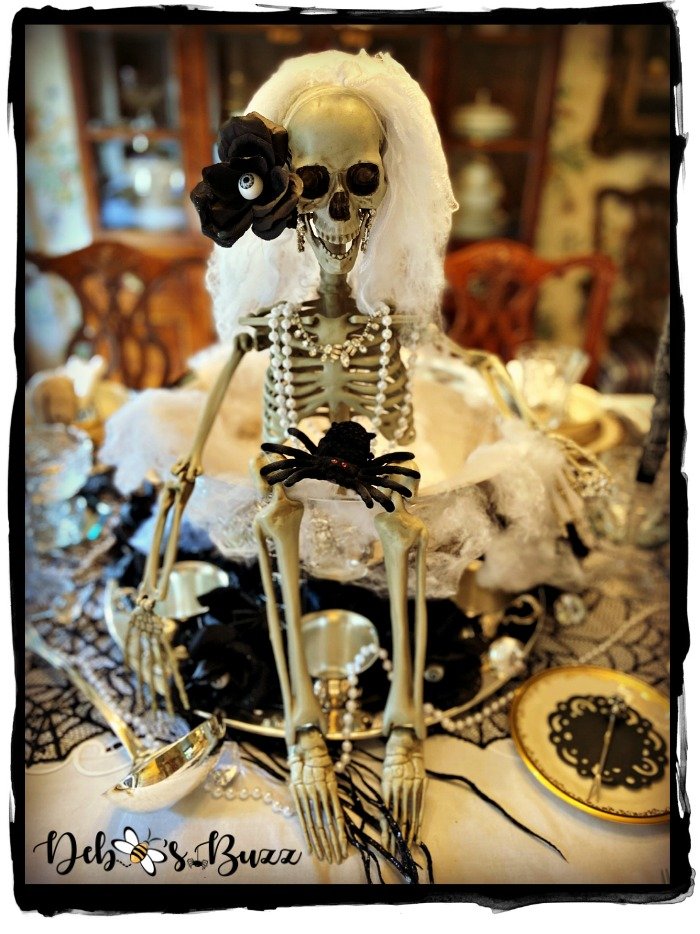 Next, she was sitting upright again. But this time, Stella was wearing a wig of spider web on her numbskull.

She must have made nice with the spider, now perched on her knobby knees. 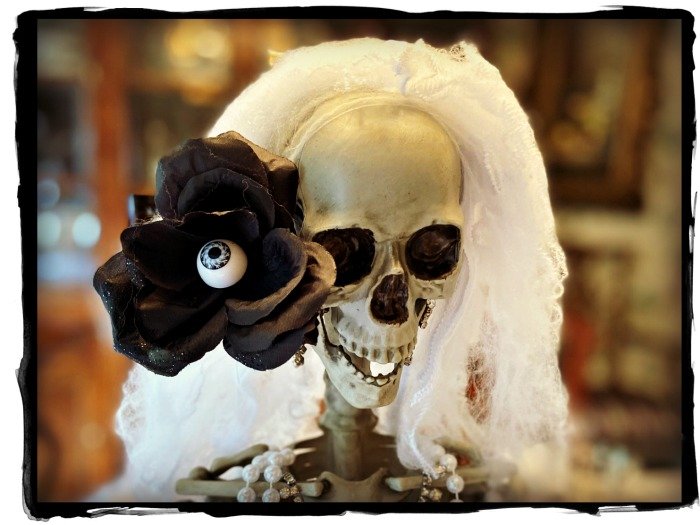 Tucked behind her missing right ear, Stella had tucked a black rose. 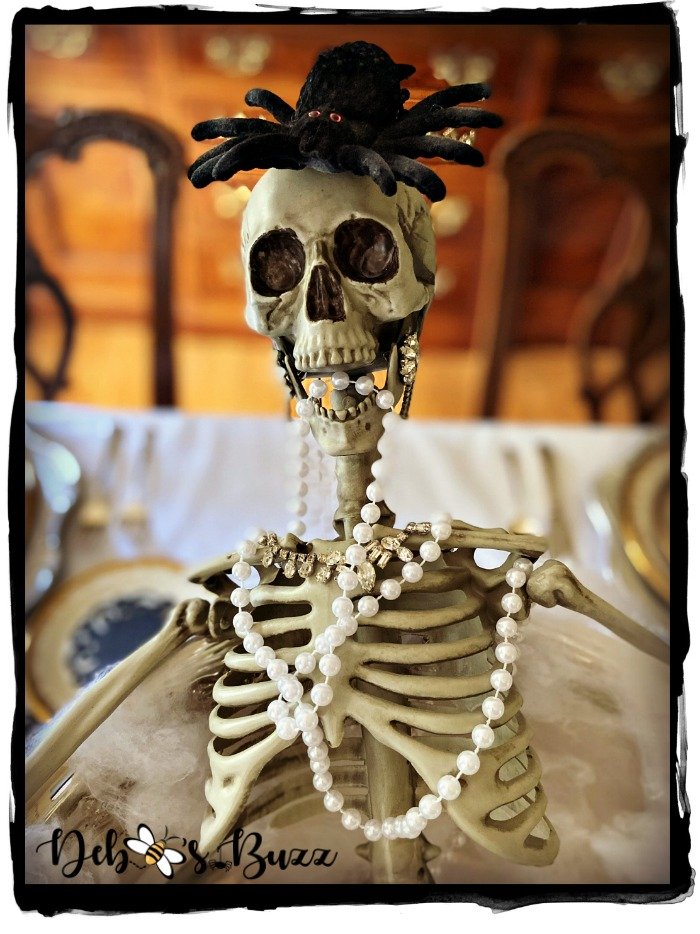 After I removed her makeshift wig of hair, the silly skeleton set the spider on top of her head. Stella must have been a little creeped out, as she clenched my pearls between her teeth.

What she did next, however, was a step too far.

Swinging from the Fixtures

That’s when I found her dangling from the chandelier, about to dive into my beautiful silver punchbowl! Seriously Stella? 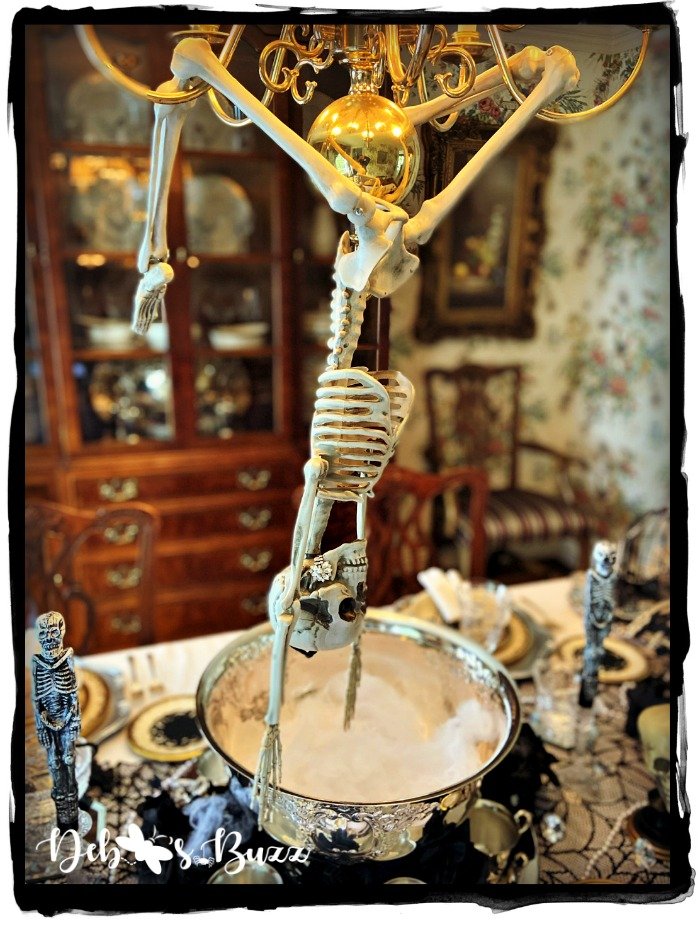 It was reminiscent of Mr. Bone’s rude behavior in Jaw Dropping Halloween Chandelier, 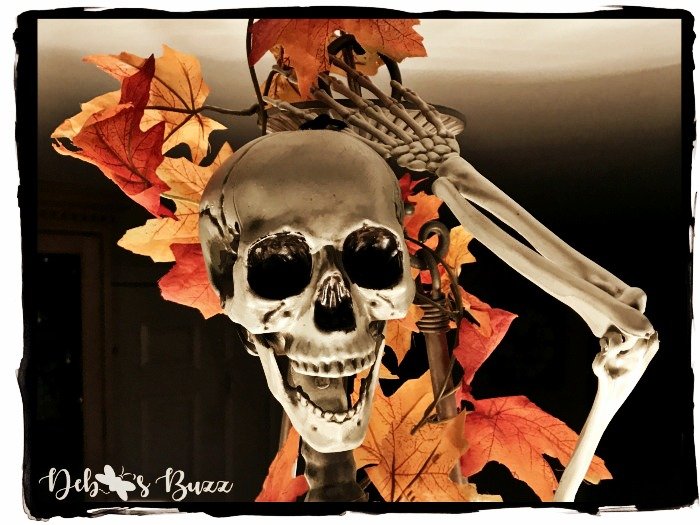 Last year, I had found him perched over the Spooktacular Skeleton at the Feast Halloween Table. 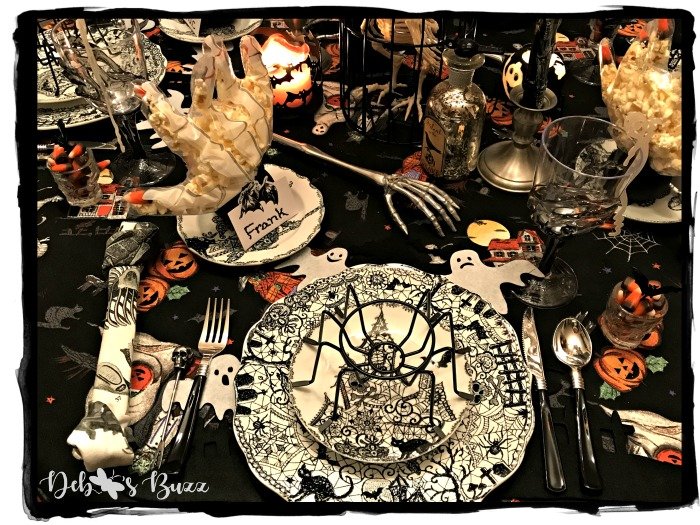 At that point, I had had quite enough of Stella’s carrying on.

Since I had finished photographing the Halloween table anyway, I unceremoniously removed her bony behind — and set her aside. Then, I started putting things away, beginning with the silver punchbowl that Stella had misused. 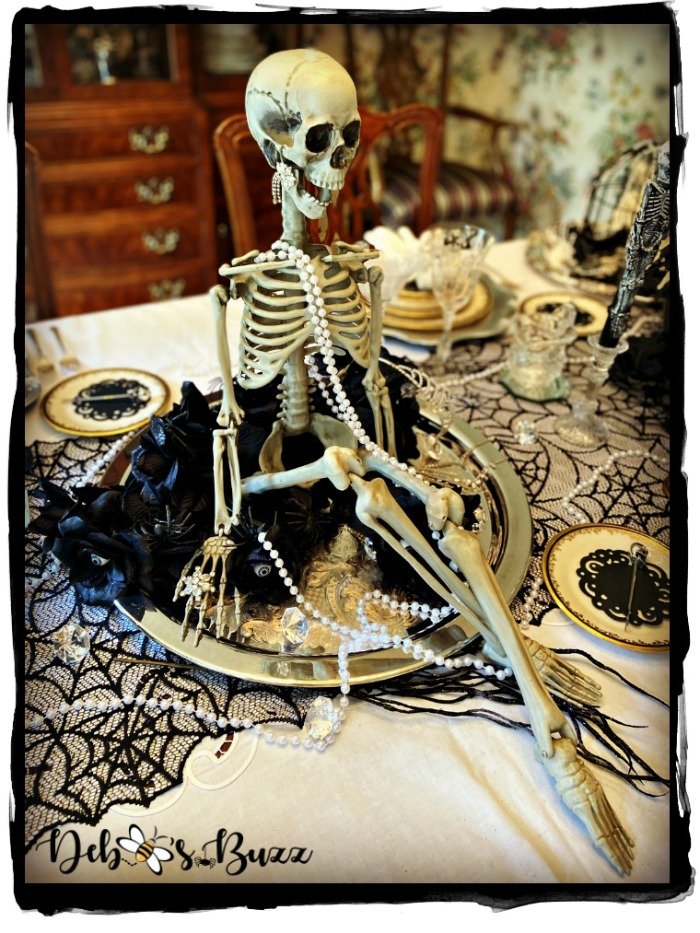 Undeterred, the silly skeleton stood her ground by plopping herself down on the silver tray when I left the room! 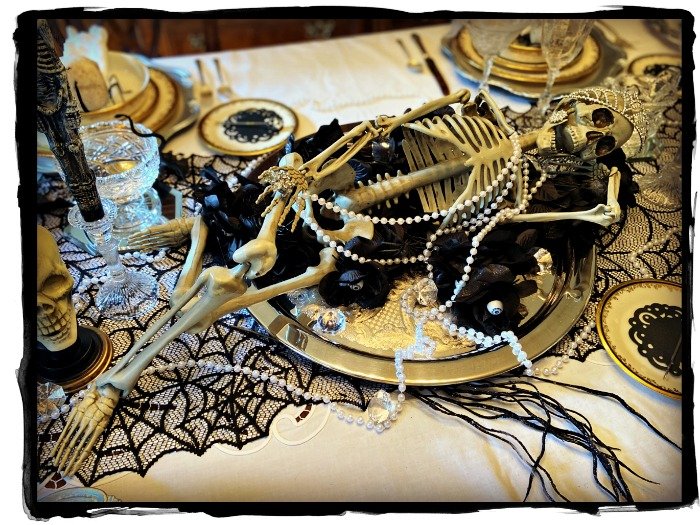 Even as I continued to pack tableware and decorations away, Stella was determined to remain center stage on my dining room table.

She not only continued to make herself comfy on a bed of black roses, but crowned herself queen! 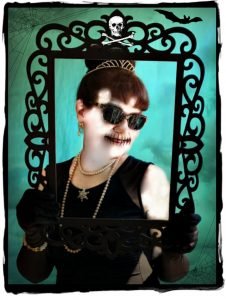 Well, two can play at that game — boo! I transformed my Holly Golightly from the Breakfast at Tiffany’s Theme Brunch (note the tiara) into a Haunted Holly Ghoul.

For Halloween the queen of theme has turned into the queen of scream! Although after surgery, my foot bears more of a resemblance to Frankenstein’s monster, lol.

On Thursday I got my first look, and it sure wasn’t pretty — ugly incisions and bruising all over. Although X-rays revealed the screw, string and a metal plate inside my foot were all appropriately positioned.

All is well, with no sign of infection and hardly any swelling. Now I’m back in a cast for the next couple of weeks, until they remove the stitches. Then, recast for another month. I just have to try to be patient and not go stir-crazy while I heal.

Which of Stella’s silly skeleton poses would you have chosen as the final centerpiece for the Halloween Gothic Glam Table? Here’s the one I went with. 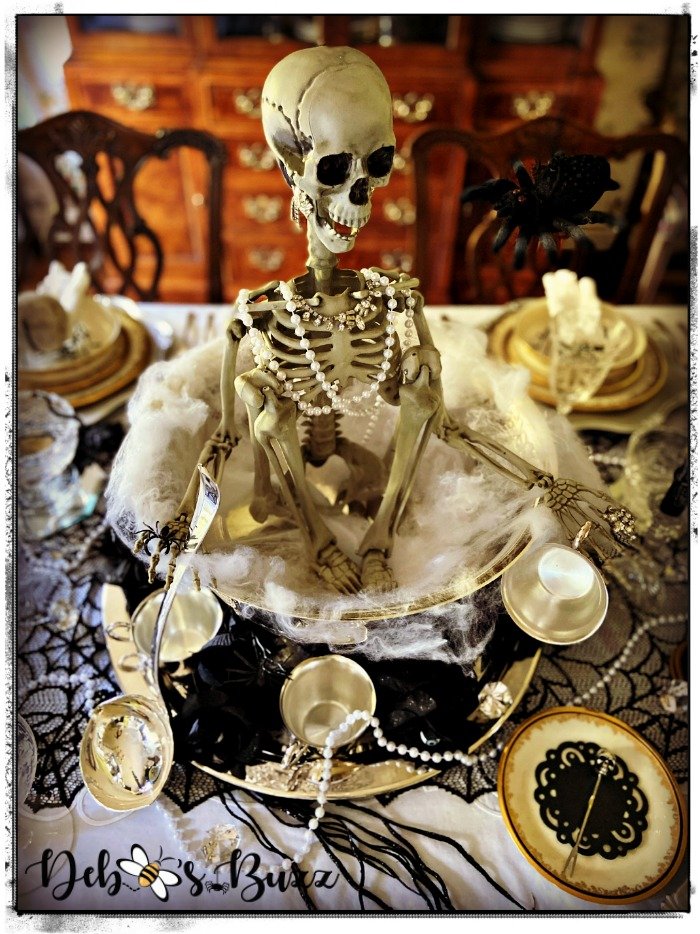 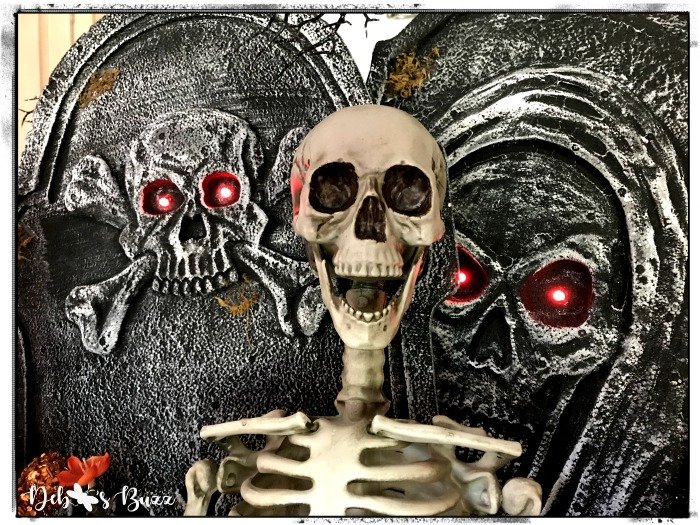 Several days ago, our family finally got some exciting news on the pet front. 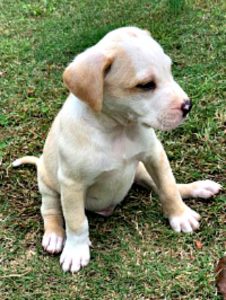 Our youngest son’s adoption application for a rescue dog had been accepted! Woo who! The puppy and his 10 litter mates are being transferred up North from a foster home in South Carolina.

As many of you know, my search for a Scottie puppy has been unsuccessful over these many months. It’s part of the reason I moved forward with the elective surgery — to get it behind me.

However, the afternoon after I scheduled everything, I got a call that a Scottie male had just been born in Ohio and was mine!  It was a gut punch, and I had myself a nice little cry. But, I decided to stick with my decision to have surgery.

At Christmas, it will have been more than a year since I lost Fibber McGee, My Fuzzy Funny Valentine. 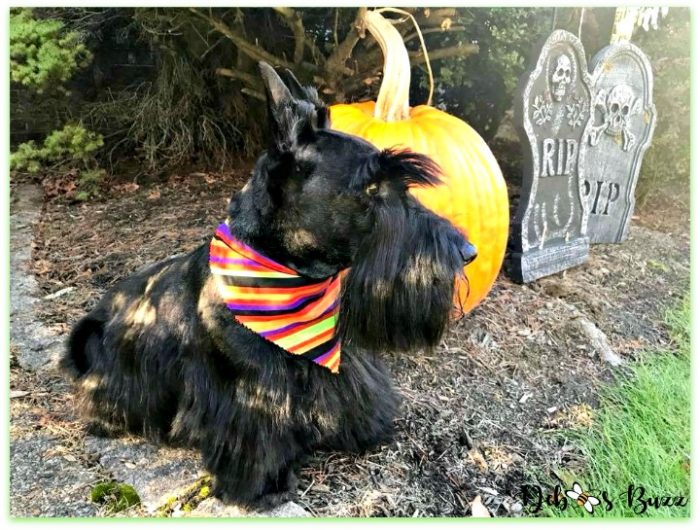 So, it is with great expectation that our son will be picking up the lab mix pup on Halloween — an extra sweet treat. We hope to meet him over Thanksgiving.

Have a safe, happy and healthy Halloween!

Hi! I’m Debbee, a maker of all manners of things, who likes to incorporate themes into craft projects, holiday and seasonal decor, table settings, and parties. My friends call me, the Queen of Theme lol! 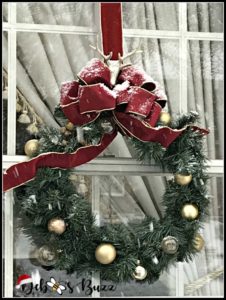 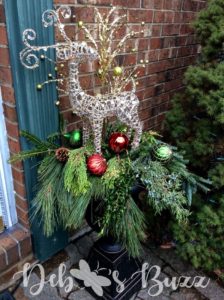 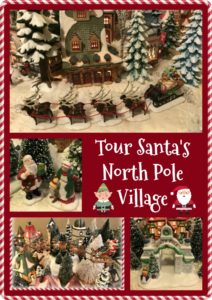 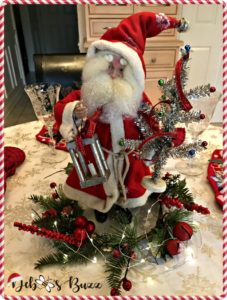