Bird Bonding at the National Aviary 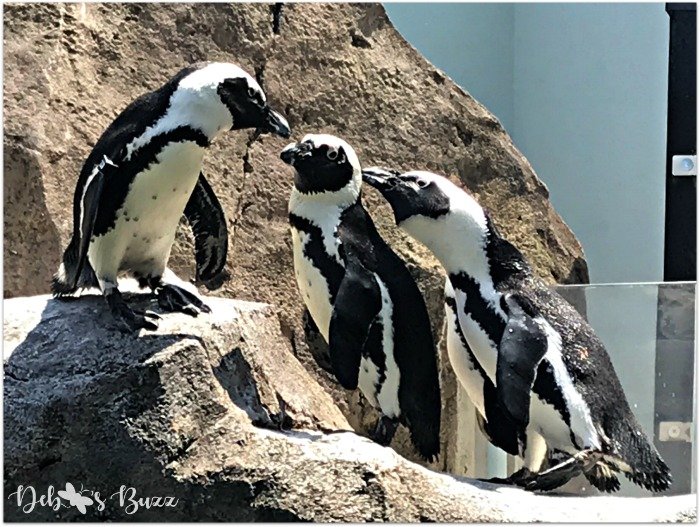 Mr. Buzz and I have been trying to enjoy a local excursion once or twice a week this summer. Recently, we spent a wonderful afternoon at the National Aviary. 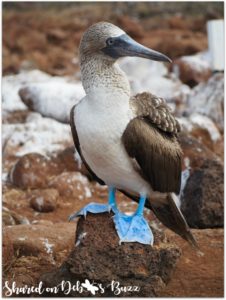 Pittsburgh is extremely fortunate to have both a world-class zoo and aviary. They are completely separate and located in different parts of the city. When the boys were small, we went often. Birthday parties were held there. Many times, visiting grandparents, aunts, uncles and cousins joined us.

While vacationing this past June in Peru, Ecuador and the Galapagos Islands, we were awed by the diversity and beauty of nature and wildlife. In particular, was the experience of seeing so many rare and endangered birds; including the Andean Condor, Galapagos Penguin, and Blue-Footed Booby.

I get goosebumps and choked-up when I think about what an incredibly moving experience it was to see exotic birds up close, in their natural habitat.

Upon returning home, we realized it had been years since we’d visited the National Aviary — located right in Pittsburgh. Come see why so many birds of a feather flock here!

Birds of a Feather Gather Here

One of the country’s first facilities dedicated solely to the exhibition of birds, the National Aviary is home to about 500; representing over 150 species from around the planet.

Near the aviary entrance, visitors are greeted by a pair of Toco Toucans in a new habitat called, TreeTops. They are the largest of about 40 species of toucans.

With the largest collection in the country, the aviary features birds from every continent except Antarctica. Many are showcased in free-flight mixed species exhibits, allowing the birds to demonstrate natural behaviors.

Two different types of birds of prey are in the Main Hall; including breathtakingly beautiful Bald Eagles. 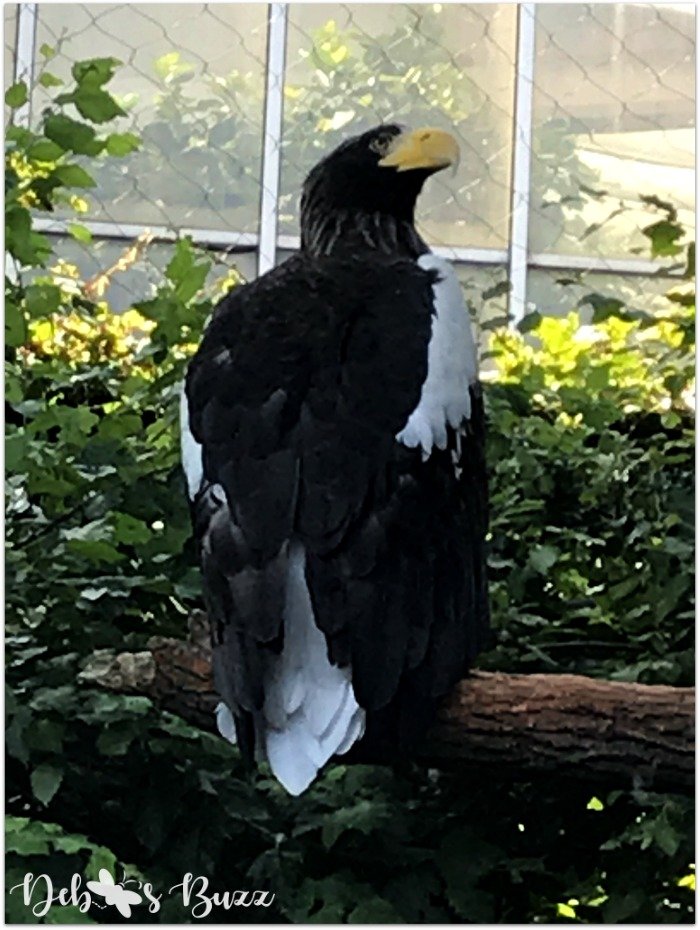 With wingspans of up to eight feet, is the Steller’s Sea Eagle pictured above. Majestic isn’t he?

Across the hall is an Avian Care Center. There, visitors may observe hospital patients and learn about their unique veterinary care. Chicks are often visible through the center’s window, offering a unique opportunity to see them up close.

Next door, is the KItchen Window. Every day, visitors watch aviary staff and volunteers prepare food for about 500 birds.

One of the first zoos with free-flight rooms and natural exhibits, the National Aviary later evolved its focus toward wildlife conservation. In 1993, it was designated honorary national status, by declaration of the U.S. Congress. 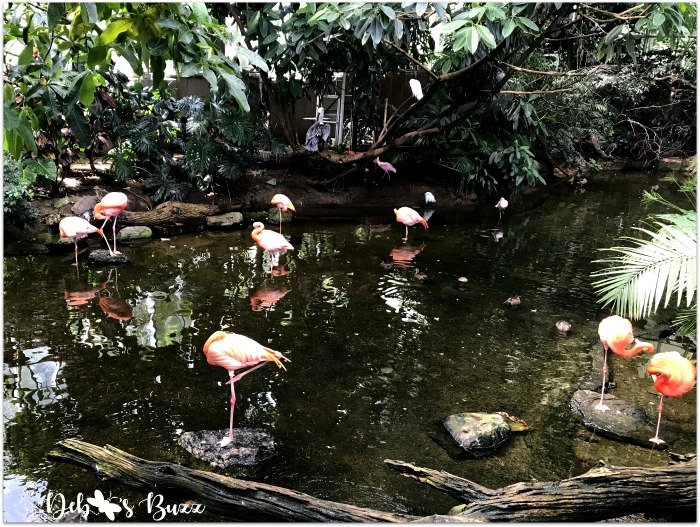 Taking in the Shows

We started our day attending two 25-minute bird shows. Each is offered once in the morning, and again in the afternoon.

First up, was the Amazing Amazon, an immersive experience in the aviary FliteZone theater. Unfortunately, I wasn’t able to take any pictures, as photography can startle the birds. “Narrated” by a toucan, the multi-media show took visitors into the Amazon rainforest.

Best of all, was seeing all the exotic birds, including colorful macaws. Many flew to and fro across the intimate theater, from handler to perches — and sometimes guests. There was also a comical armadillo and a sloth named Valentino!

Kids of all ages really enjoyed themselves and appreciated the messages on conservation and sustainability.

Afterwards, we headed to the Skydeck rooftop theater. SOAR showcases birds of prey in free flight. It also provides a live demonstration of how the different species catch and eat their prey. 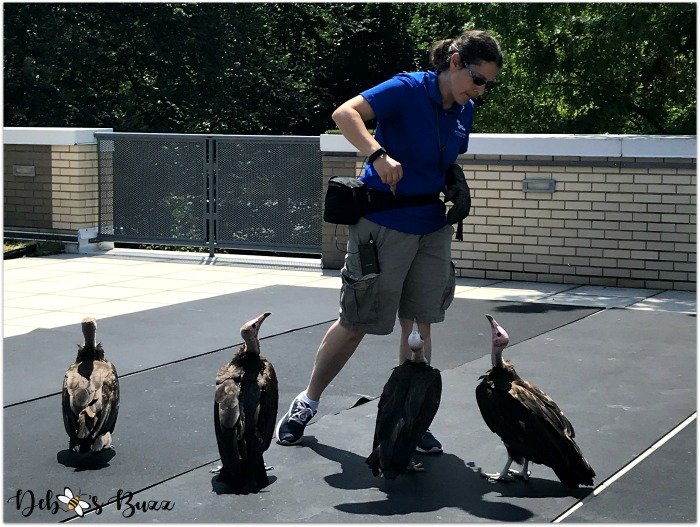 Awaiting a signal to take to the skies around the aviary, is a foursome of endangered, African Hooded Vultures. Spotters alerted the trainer from which direction each was coming — at high rates of speed — to catch food thrown high in the air.

Hubby had the most interactive experience, as he seemed to be directly in their flight path. If you think they look big here, imagine them with their wings spread wide, directly above your head! 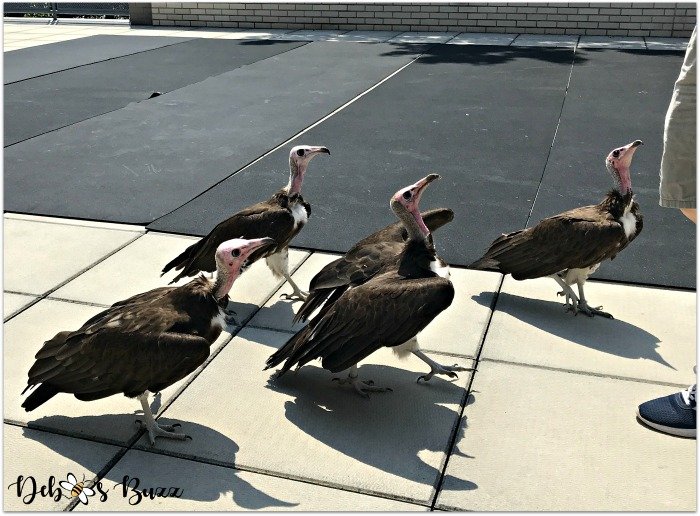 Next up, we watched Black Kites eat “on the wing;” catching prey in the air with their talons and bringing the food to their mouths. Kites are a medium-sized, primarily brown raptor, with long wings and tails. I thought they looked sort-of like lean eagles, and was too busy watching the action to take pictures. 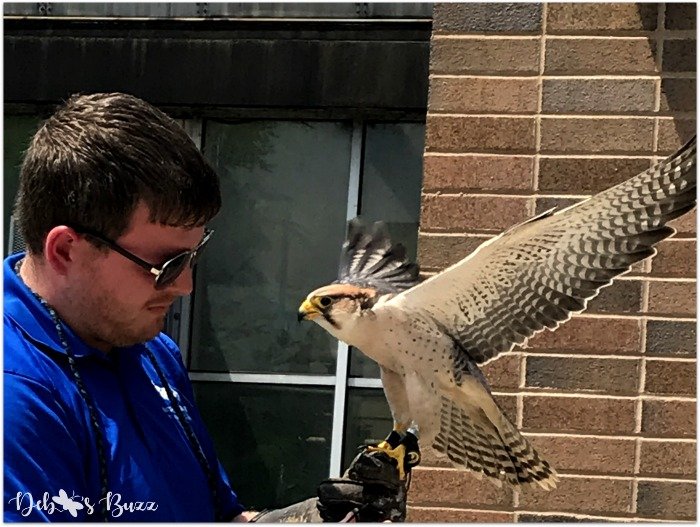 Here, a handler is attaching a small transmitter to the foot of a Lanner Falcon. Data, like the raptor’s flight speed, is collected for research purposes. 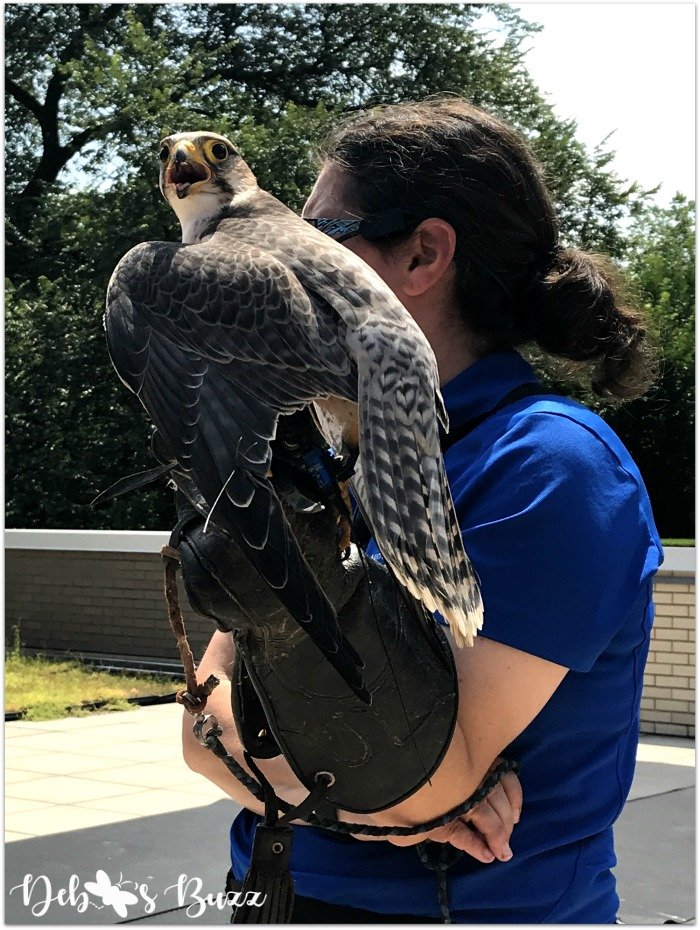 After the fascinating show, it was good to get out of the direct, hot sun and head back inside for a nice lunch.

I was already a penguin lover before we headed south of the Equator. While there, I had the thrilling opportunity to snorkel and swim with Galapagos Penguins in the wild. One of my favorite photo moments from the entire vacation! 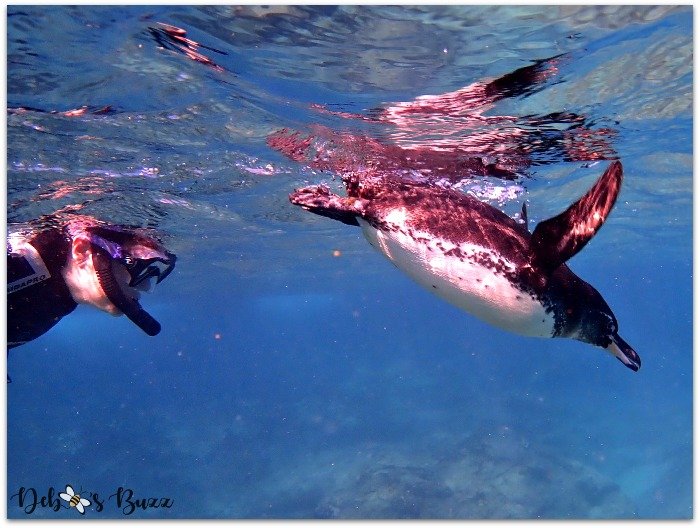 Of 17 penguin species, little Galapagos Penguins are the only ones found north of the equator. Despite the tropical latitude and volcanic landscape, cool waters of the currents allow it to survive there. Wetsuits helped keep us humans warm.

Penguin Point is home to about 20 South African Penguins. Twice daily feedings are not to be missed! Penguins lineup and take turns being fed live fish. Meanwhile, an aviary intern carefully records who ate what. 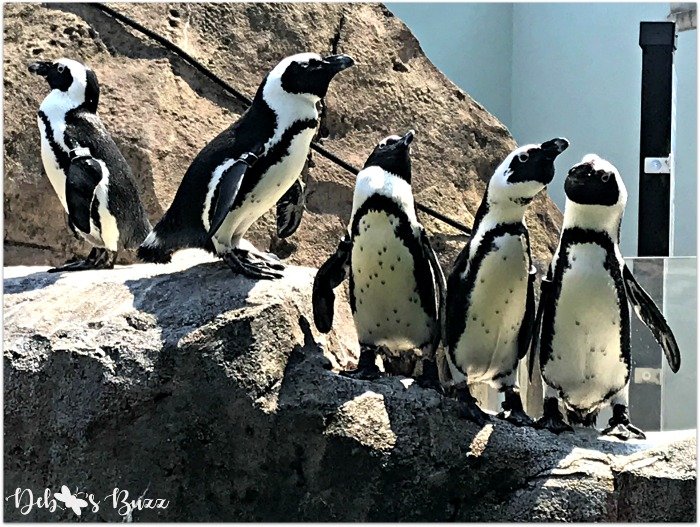 “… immersive exhibit transports visitors to the rocky shores of South Africa to experience the sights, sounds (and smells!) of a real penguin colony… open-air exhibit gives guests a 360-degree perspective of African penguins waddling, squabbling, scaling rocks and torpedoing their way through the water.”  National Aviary 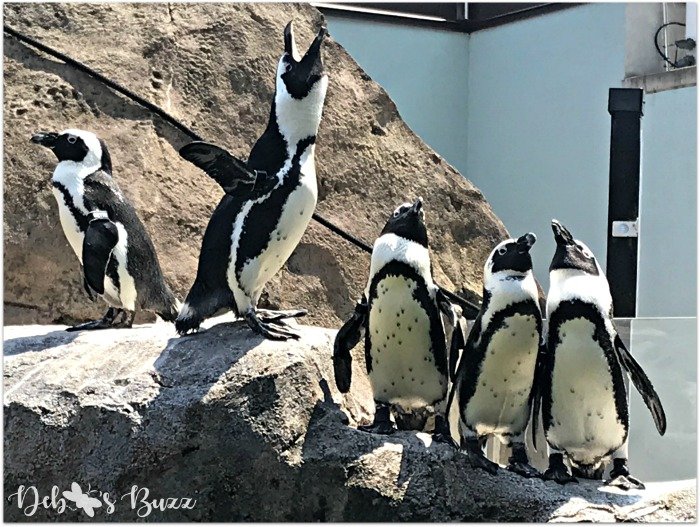 One penguin loudly proclaimed it’s impatience for the feeding to begin. He sounded like a donkey braying! But, he still politely took turns eating, along with the rest of the colony. 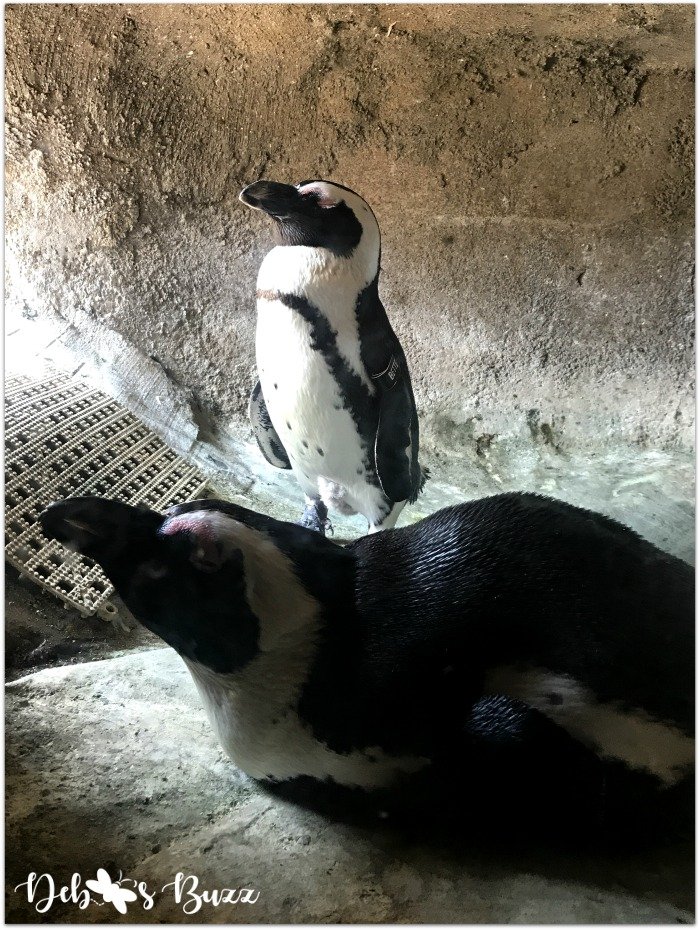 While we were there, the aviary’s successful breeding pair was preparing for new arrivals. Heated nest cubbies provide a cozy place for the penguins to congregate during cold winter days.

Pittsburgh is for Penguins

If you like penguins, Pittsburgh is the place to visit! Two species native to Antarctica (Macaroni and Gentoo) reside across the city at the Pittsburgh Zoo & Aquarium.

And downtown, at the Pittsburgh Paints Arena, another flock of ice-loving penguins and their fan colony hang out — our five-time Stanley Cup Pittsburgh Penguin hockey team! 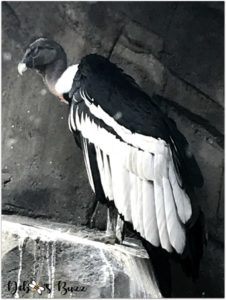 During our trip to Ecuador, we stayed several days at the 4,000-acre  Hacienda Zuleta. One of the highlights of our visit, was a horseback ride and visit to a reserve where Andean Condors are studied, rehabilitated, and protected.

While there, the French biologist told us how impressed he was with the National Aviary and its successful breeding program.

With a wingspan of 10 feet, Andean Condors are one of the largest raptors in the world. Condor Court at the aviary is designed to provide these massive birds with plenty of room to stretch their wings, rocky ledges to perch and nesting cavities. It’s designed to mimic their natural habitat.

So, it was a thrill to see the magnificent condors again, and relatively up close. Although, observing them in free flight in Ecuador is an experience I will never forget. I would have stood there all day if they hadn’t eventually disappeared from view.

Three immersive areas allowing visitors to view habits and behaviors of the birds living freely within the exhibit. After Condor Court, we headed back inside to the Wetlands to watch the afternoon feeding. 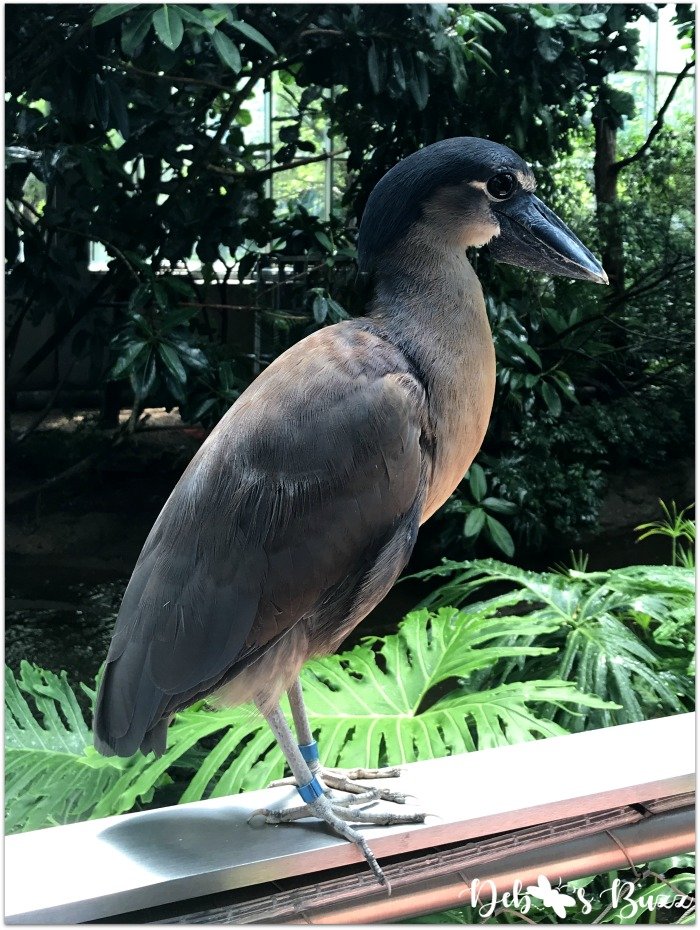 Freddie was abandoned by his mother and hand raised at the aviary. So, he’s very comfortable with humans. During the interactive feedings, he calmly sits on the bridge railing. He also lets people walk right up to him — without getting his feathers all ruffled! 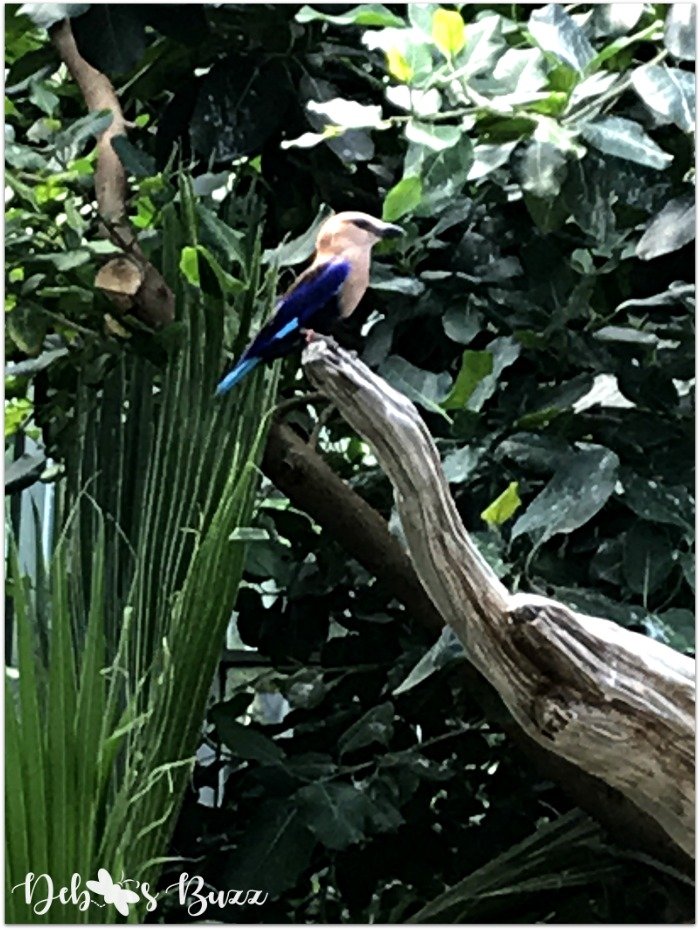 During the session, I got to help feed large, live worms to birds in flight. Kiddies preferred feeding seeds and pellets to birds from their upturned hands.

Most of the birds were too small and fast for an amatuer like me to capture in pictures. I’m better painting them, like the Hand Painted, Wedding Champagne Flutes. 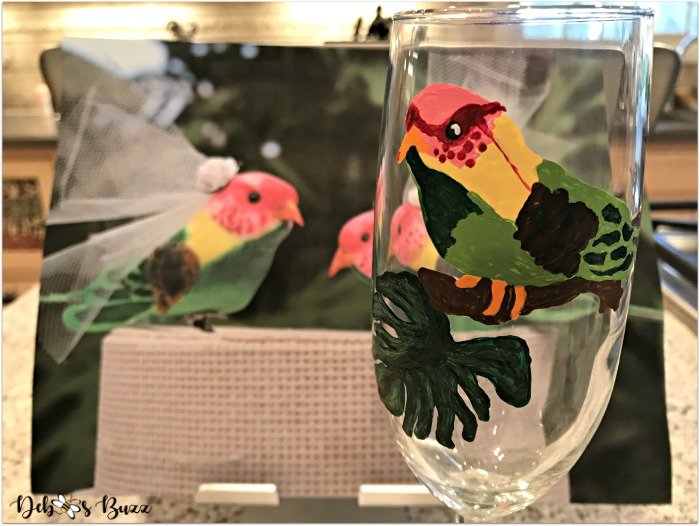 However, I was able to photograph a beautiful blue Victoria Crowned Pigeon who was slowly waltzing around the Wetlands. 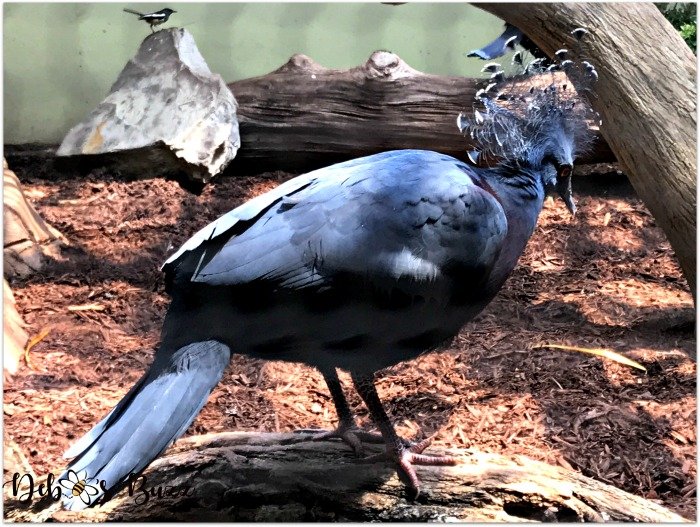 Do you have an aviary or conservatory with birds near you? Are you a bird lover and/or watcher? Have a personal favorite?

Before heading home, we stopped for old fashioned ice balls at another Pittsburgh “institution” — Gus & YiaYia’s. 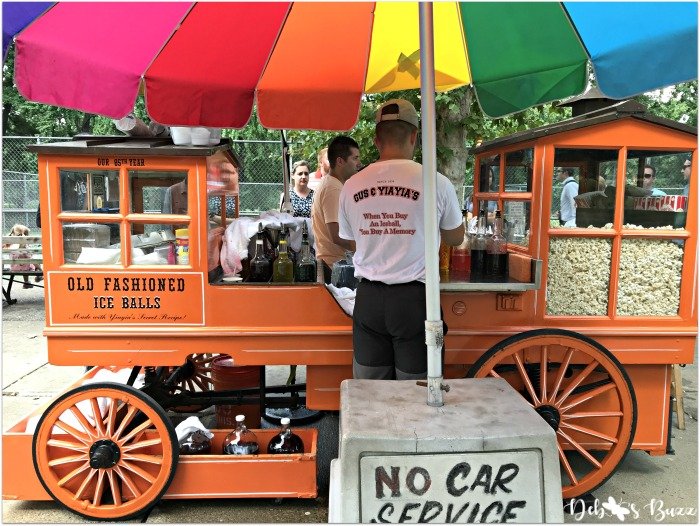 It’s been a fixture in the beautiful park on the North Side for 85 years. Long ago, the area was called, Old Allegheny City. Later, it was annexed into the City of Pittsburgh. Many of our German ancestors originally settled in what was also referred to as, Deutschtown. 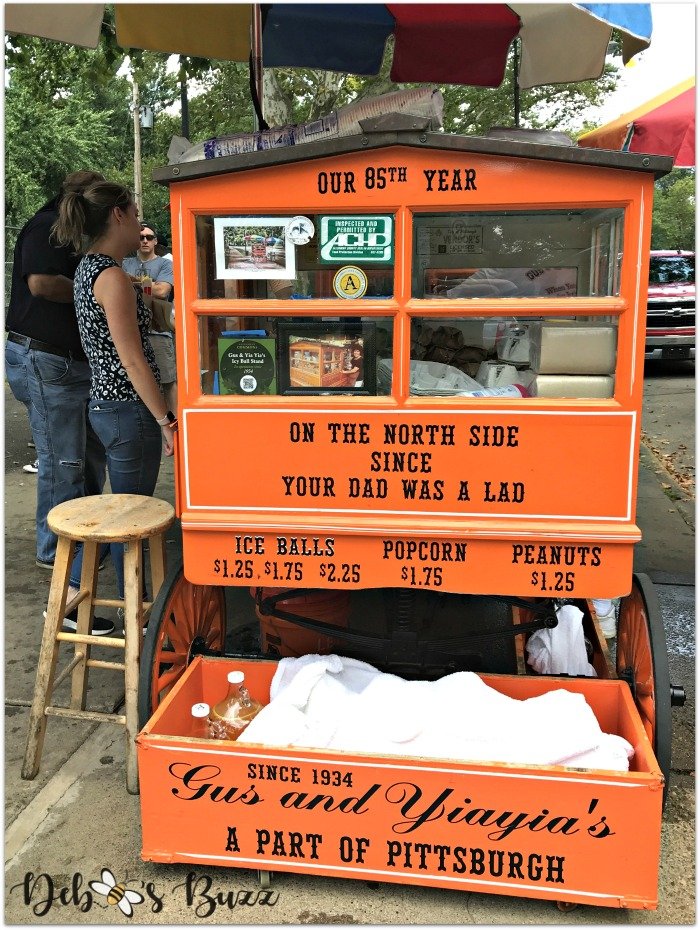 While we were enjoying our treats, a steady stream of customers came by on foot and by car. I had pineapple and Mr. Buzz had traditional cherry flavor ice. It was a lovely way to spend a Friday with my honey.

A week before, Mr. Buzz and I decided to find out what Picklesburgh was all about. Voted, “#1 Best Speciality Food Festival in America,” it was the fifth year for the annual weekend of “all things pickled.” 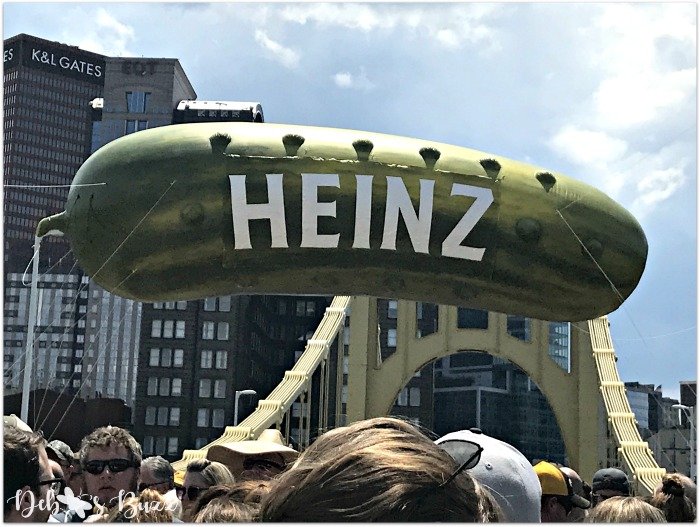 Heinz, which originated in Pittsburgh, is the main sponsor. I was delighted to pick up a golden pickle pin — in honor of the company’s 150th anniversary. Football fans may know our stadium is called Heinz Field. My favorite part of games, is when the Steelers get within the twenty-yard zone. That triggers two giant Heinz bottles to tip over and “pour” ketchup on the scoreboard.

Stretching across the Roberto Clemente Bridge and extending to riverside lanes on either end, Picklesburgh included vendors of all sorts, live music, and a pickle juice drinking contest. 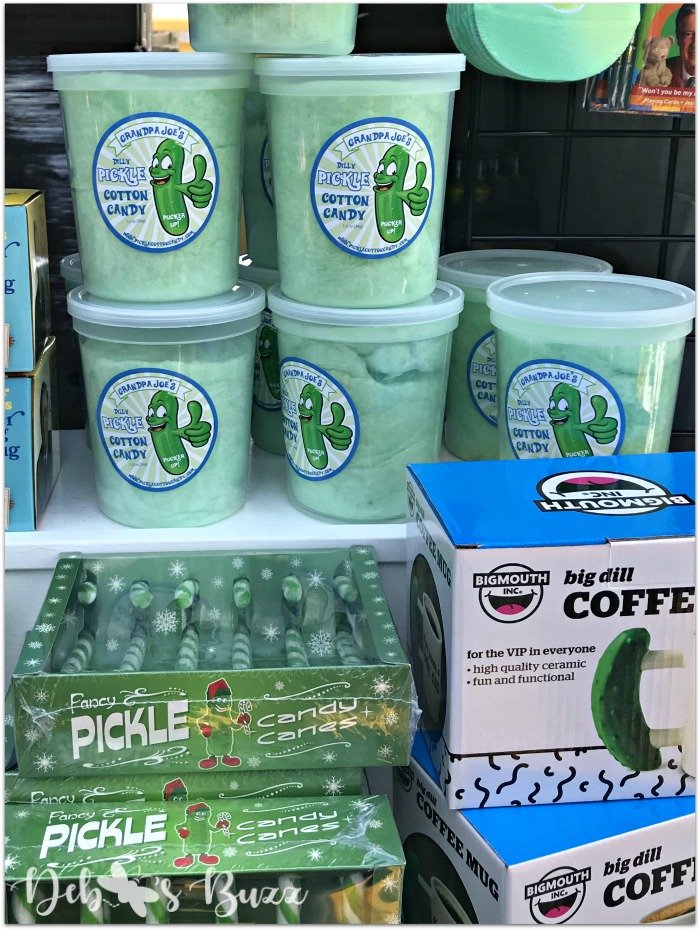 I relish (pun intended!) pickles, but pickle beer and cotton candy? Not so much! Still it was fun sampling all the different food and beverage offerings. Do you like pickles?

Does your town or community have an annual food or music festival it’s known for? 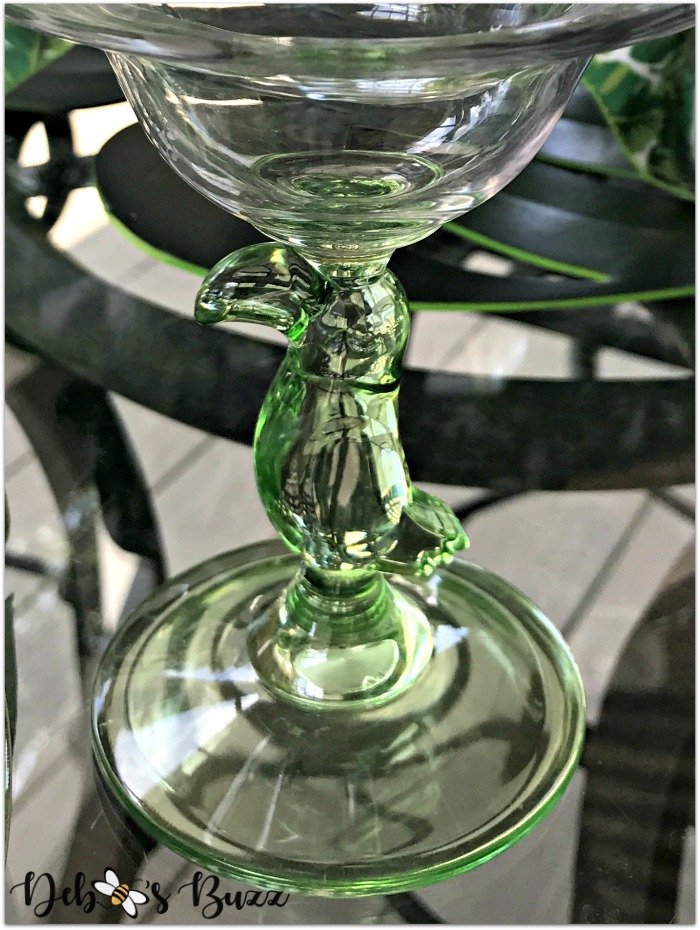 Stop by next week for the Late Summer Tablescape Hop. On Monday, I’ll be sharing a Palms, Parrots & Paradise Tropical Table.