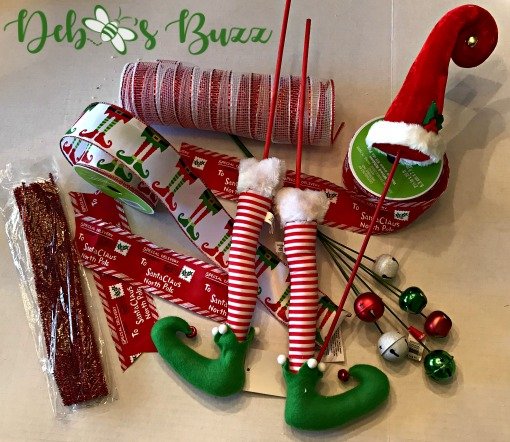 Today’s post features an elf Christmas wreath, I’ve named  after a very old and dear buddy of mine. 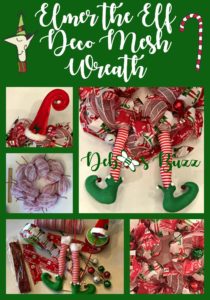 This is the second post on Christmas wreaths I made for my sons.

For both wreaths, I followed a similar, five-step process using deco mesh techniques. I share a supply list, as well as instructions, tips and photos to help you follow along the production process.

Let me begin with the inspiration for the elf Christmas wreath and it’s name, Elmer the Elf.

For that, I have to tell you a magical Christmas story of old. Elmer has been part of my family’s Christmas tradition for over half a century.

A Trip to the North Pole

It all began one summer, when my parents took me to White Face Mountain in Lake Placid area. While in the area, we visited Santa’s North Pole Workshop. 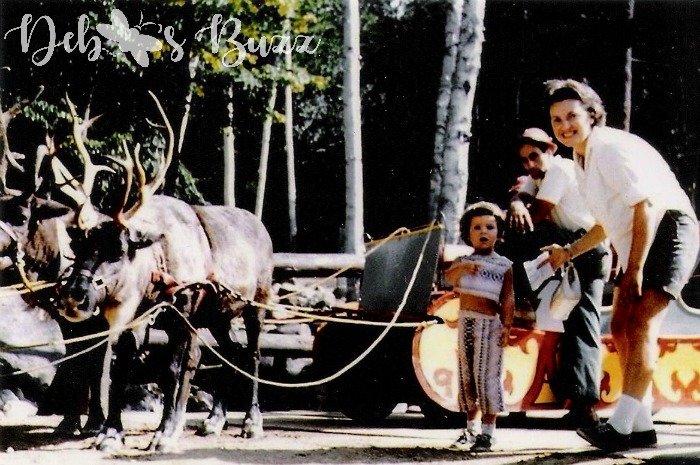 At Whiteface Mountain you can see Santa’s home, a reindeer barn, toy workshop, and ‘official’ North Pole post office. I still have a reindeer shoe and nail from that trip. Established in 1949, it is described as the forerunner of all theme parks. But in my childhood memories, it was … and still is, the real deal. I believe!

That’s where I met, Elmer the elf. 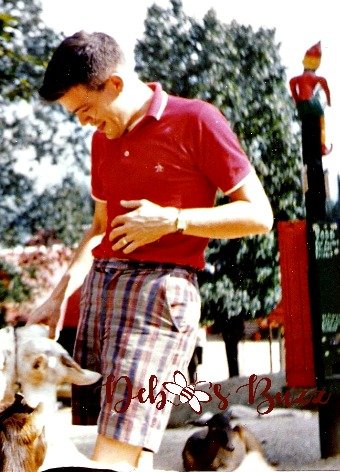 There I was, minding my own business, when this elf starts talking to me from above! Sunning himself atop a wooden pole. I remember trying to hide behind my dad — rather startled and more than a little leery.

No mater where I moved, it seemed Elmer could still see me.

He even knew my name! Elmer seemed to know everything about me.

OK, I know you may look at this picture of my dad and see a plaster figure in the background. But, that’s just the way magical beings appear in a photograph!

He was (is) a warm, breathing, living elf in my mind’s eye.

He Knows if You’ve Been Bad or Good

Elmer explained that Santa uses his legions of elves to help determine who’s been naughty and nice. The elves also report back what good little children want for Christmas. Apparently, there is a magical communication system that allows elves to provide regular updates to Santa. These guys are an independent group from toy-maker elves.

It is a magical, wonderful memory I treasure and that continues every Christmas.

Elves in the Attic 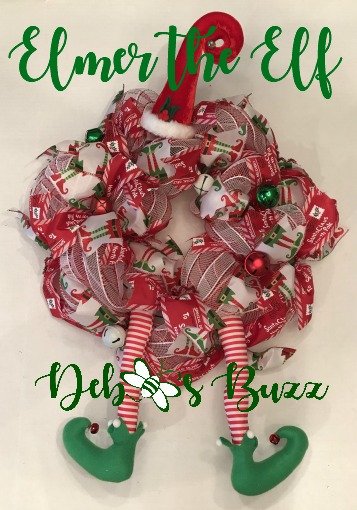 Every year, on Thanksgiving night, Elmer travels down from the North Pole and moves into our attic — sight unseen. Elmer said he’d be there, and I believed him! I still do.

My mother often complained of him raiding the kitchen for snacks in the middle of the night, while we all slept. Open boxes and crumbs were frequently found on the kitchen counter, and sometimes under the attic access in the hallway near our bedrooms.

My younger sisters and I always slid carefully under the attic hatch. We weren’t afraid of Elmer, but maybe a little intimidated. Certainly, we were in awe of him. None of us actually wanted to run into Elmer. It was enough that we knew he was there, reporting back to Santa.

On Christmas Eve the elf returned home in Santa’s sleigh. But, not until helping himself to the snack we always left for Elmer, Santa and the reindeer too!

Elmer is very, very old and came to be long before the Elf on the Shelf story and tradition.

I always felt rather special that I had been to the North Pole and actually met my ‘house’ elf. Not only that, but most kids were clueless that they even had an elf in their attic who was reporting back to Santa!

If you think about it, it makes a lot of sense. Millions and millions of kids for Santa to keep track of. Of course he has an elf network around the globe. Do the math people!

And the cycle of magic happened year after year, after year. Right down to my and my sisters’ children — from generation to generation. The dearly loved tradition lived on with my sons and their cousins. Someday, Elmer will return, once there are grandchildren. I can’t wait to “see” my old friend again!

Do you have any family Christmas stories you’ve passed down?

Create Your Own Elf Christmas Wreath

I used pipe cleaners, seven for each of the inner and outer rings of the 16-inch green wire frame for the Elf Christmas wreath.

No need to spray paint it white or red as the mesh provided good coverage. 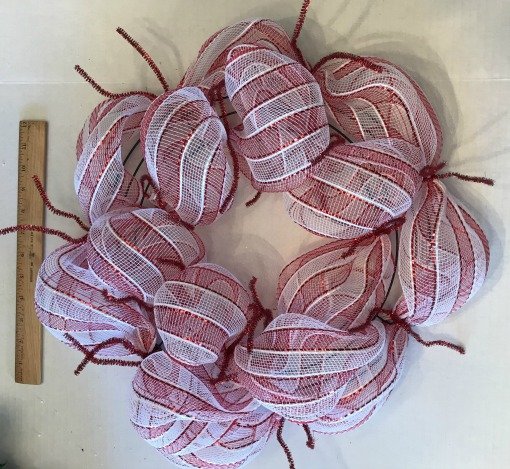 It’s always best to have an odd number of pinch points for balance and fullness of the deco mesh ‘poof’, ribbon clusters, and placement of embellishments.

Although both the candy cane and snow mesh used in the Bringing Home the Christmas Tree wreath rolls appeared to have the same length of material, they did not. The candy cane mesh was twice the length, even after going around the same size frame twice. There’s plenty left for another project. Lesson learned — read the label dimensions first Debbee!

With 14 total inner and outer pinch points, the elf Christmas wreath required 14, 10-inch lengths of each ribbon style. Since both the elf leg and Santa mail ribbons were 2 1/2-inch wide, I alternated which ribbon was on the top and bottom. This balanced the look of the two prints around the wreath.

Just pinch each ribbon in the middle, lay over the red pipe cleaner and twist twice. 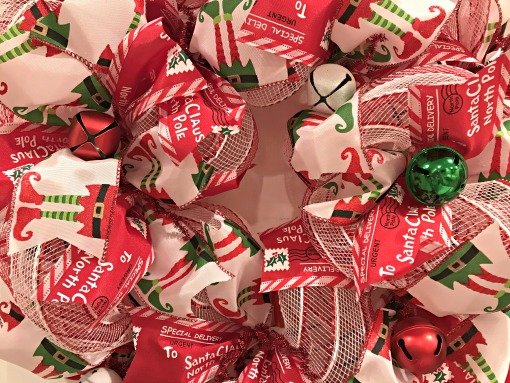 First I cut the jingle bell floral pick into six separate sticks, shortening each stick to about two-inches. I then arranged them at pinch points, by spacing around the wreath and alternating the three different color bells.

Each bell stick was pushed through to the back at an angle. Again, pipe cleaner was twisted around each stick several times, to secure the bells in place.

The elf hat and legs I had purchased were on long stakes, intended to insert in a floral centerpiece or arrangement. I cut the stake lengths to fit the wreath; figuring I could tuck them into the wreath frame and wire into place. Then, I realized there was a problem. If I attached the hat and legs in place, the wreath was going to be much longer than the box I had to ship it in to Philadelphia. It would take a much larger box and be prohibitive costly to mail.

So, like some of the toys Santa brings (i.e. bikes), there was going to be some assembly required by son upon delivery! I took a picture for him to see the positioning, and provided additional pipe cleaners and heavier evergreen stems to secure the legs and hat into place.

Elf Takes Up Residence in Philadelphia 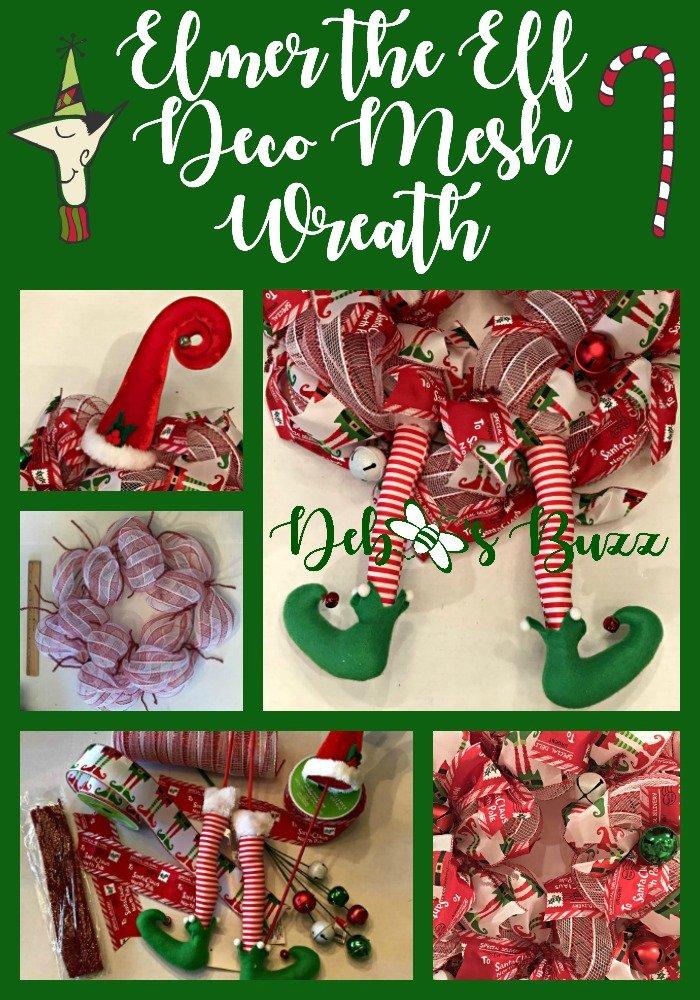 The elf Christmas wreath design shows Elmer’s hat and legs but not his face or body. That’s because I’m the only one, besides my parents, who have seen him in person.

He remains an illusive, magical, and much-loved presence.