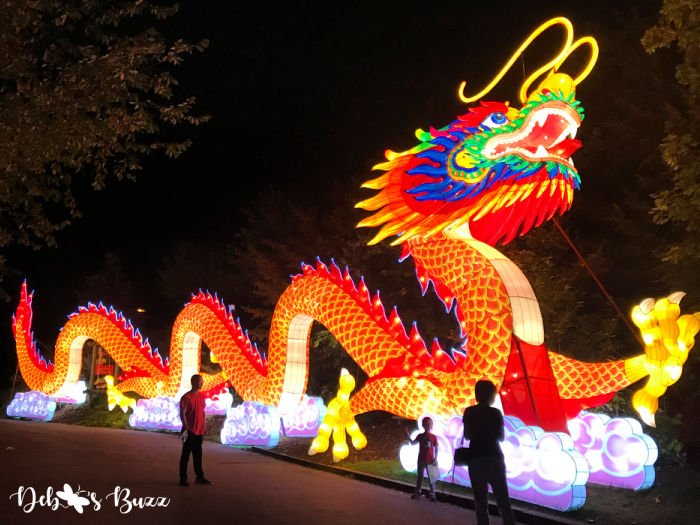 The towering archway at the lower entrance was a hint of the impressive lantern festival displays awaiting guests. Four large, golden Chinese Lions sit around the arch base.

All the steel and silk sculptures are intended to encompass three connected themes; the Pittsburgh Zoo, its global species conservation partnerships, and Asian culture. At each display, a small plaque details the lantern’s artistic meaning and Chinese roots.

After entering the gate with a timed-ticket, guest pass through an illuminated tunnel of wisteria that slowly changes colors. Wisteria symbolizes long-life and immortality, and can live to 100 years or more.

Visitor Tip: Our timed-entry was for 7:30 PM, or sunset in late August. However, we arrived a half an hour earlier than expected, which is why some pictures were taken before it was dark. Ultimately, I recommend arrival for 15-30 minutes after sunset. It takes about 90-minutes to leisurely walk through the zoo. Allow more time if you plan to eat dinner there. The Asian Lantern Festival closes at 10 PM.

At the top of glass-enclosed escalators or elevators, guests were greeted to the sights and sounds of the Pittsburgh Taiko drum ensemble. Scattered around the Village area are also several lantern displays.

First, was an animated chameleon that rolled it’s eyes, and opened and closed his mouth. After darkness fell, the chameleon gradually and dramatically changed colors.

A Lantern or Shangyuan Festival is a Chinese tradition celebrated on the fifteenth day of the first month in the lunar calendar. It marks the final day of traditional Chinese New Year celebrations.

During a lantern festival, children go out at night carrying paper lanterns and solve their riddles. Most common are red color lanterns which symbolize good fortune. The lights can also represent people letting go of their past selves and embracing new ones.

In ancient times, the lanterns were fairly simple, and only the emperor and noblemen had large ornate ones. In modern times, lanterns may be embellished with complex designs. Many are made in the shape of animals.

Continuing along the pathway, we came upon 12 animal lanterns representing the Chinese Zodiac.

Based on the lunar calendar, the Chinese zodiac assigns an animal — and its attributes — to each year in a repeating 12-year cycle. Although originating in China, the zodiac is popular in many Asian countries. Depending on the year born, an individuals’ personality and life events are supposedly influenced by that animal’s characteristics.

Mr. Buzz and I were both born in the Year of the Dog — woof! Supposedly, “dog people” are highly responsible and compassionate. They/we are also reliable, loyal, faithful and honest, with a keen sense of right and wrong and a desire to support the underdog. But, they can be very pessimistic, looking for all the bad things that might happen.

Do you know what Chinese zodiac year your were born?

After a walk through a beautifully illuminated tunnel, we came upon one of my favorite displays — a dozen romping pandas!

When I was an adolescent, China gifted the Washington D.C. National Zoo it’s first pair of pandas. I fell head over heals in love, and was obsessed with all things panda — t-shirts, pajamas, jewelry, figures, and a near life-sized stuffed bear on my bed. I’ll never forget my first visit to see them in person! I still regularly check in on Giant Panda Cam.

The Pittsburgh Zoo & PPG Aquarium is one of only six major zoo and aquarium combinations in the country. Located in the Highland Park area of the city, the zoo opened in 1898 and today sits on 77 acres of park land. It exhibits more than 4,000 animals representing 475 species, including 20 threatened or endangered species. Although there are no giant pandas, we do have a pair of its cousins; adorable red pandas.

A team of 10 artists and one translator from the Chinese company Tianyu, based in Sichuan, worked for several months at the zoo to construct the lanterns on site. Each is completely handmade from scratch, using no instructions.

Artists stretched painted silk over steel armatures to create the figures, which are illuminated from the inside with LED lights. To set up the lantern festival required working closely with the zoo’s electricians for power sources. And, the horticulture team to ensure valuable and rare plants were undisturbed.

Additionally, a number of the lanterns are animated — like this flock of cranes slowly flapping their wings. Check my Instagram account to view short video’s of lantern display animations and color changes.

Some birds were bigger than life, like this ostrich sitting on a nest of illuminated eggs.

Or the giant flamingos that lined the pathway. For live birds, don’t miss Bird Bonding at the National Aviary, which is also located in Pittsburgh.

Walk on the Wild Side

Most of the animals were off exhibit and safely tucked into their indoor enclosures for the night. An exception were the cheetahs and several big cats, like this fabulous jaguar. They were quite active and appeared to be waiting until it was dark to go into their dens.

Nearby, all the lions and cubs had already gone indoors, but their illuminated counterparts were posed as king of the jungle.

Further down the path, were a trio of beautifully detailed and tigers in various poses. Most of the zoo lantern festival displays were composed of pairs, flocks or other groupings of a single species.

Wildlife lanterns were generally located where the live animals are actually exhibited and housed — whether in the zoo’s Forest Passage, African Savanna, Tropical Forest, The Islands, or Waters Edge.

I particularly enjoyed the small herd of zebras with their stunning markings and realistic details.

Around the bend were a pair of large rhinos.

Next on the pathway were a trio of elephants, gently flapping their large ears.

As dusk turned to night, the lantern festival creations became more dramatic — as seen in the frog display below. It was one of the exhibits we were able to view at both the beginning and end of the winding pathway through the zoo. I loved how the frog’s eyes blinked.

Most impressive was the 100-foot long Chinese dragon in the zoo’s Village area, where we had started the tour. Earlier, at dusk, his size alone was quite impressive. But in darkness he was electric!

The artistry of the hand painting and sculpting of lanterns of all sizes was wonderful to see. Illumination and sometimes animation made the displays quite dramatic.

But one of the other joys of attending the lantern festival was seeing all the families — sometimes three generations — and delight on the faces of the children.

Join me in the next couple of weeks for part 2 of our visit, where I’ll share the amazing butterfly tree, marine life displays, polar bears and more!

Because of the COVID-19 pandemic, zoo attendance and revenue dropped significantly in 2020. The Asian Lantern Festival will hopefully help the zoo overcome some of its losses. Other zoos and botanical gardens across North American and Europe offer their own lantern festival. Perhaps there’s one near you?

The Pittsburgh Zoo Asian Lantern Festival runs Thursday through Saturday nights until Oct. 30th. Timed-tickets for adults are priced $20 online, or in person for $25 for non-zoo members. There are also lower rates for children and seniors.

And, while you’re in town, include visits to the Andy Warhol Museum, National Aviary, and Phipps Conservatory and Botanic Gardens.

This post and it’s follow-up were originally scheduled to be shared weeks ago! But, for the last several months, I have been experiencing all kinds of issues with my blog/website. The security system and firewall keep locking me out. Unbeknown to me, was that new content for this and a subsequent post weren’t saved. When I went to polish and publish the posts they were gone!

I lost at least 16 hours of work! And, that doesn’t count the time spent with tech support over a period of 10 days. So, I had to recreate all but the images again from scratch! Just starting on the second one now.

Then, my theme (it’s what you see, plus the layout and organization of my site) had a major update — with major problems! A ridiculous eight updates/patches followed. Plus, it was impossible to get timely responses from their tech department, which was clearly overwhelmed.

These issues and rising costs for all the necessary software plugins and services to operate a blog have turned my hobby into a headache and major source of aggravation. That’s why I haven’t been posting near as often.

Happily, hubby and I recently returned from a two-week, rejuvenating vacation in California. There, we visited Monterey Bay, Carmel, Big Sur, and Paso Robles. I can’t wait to share the pictures and experiences with you!

We also went to Sequoia, Kings Canyon and Yosemite National Parks. While there, we were just a day ahead of the devastating fires that closed Sequoia behind us and is threatening ancient groves of trees. I’m heartsick about it.

Pictured to the right is General Sherman, the world’s largest tree. According to the latest news, it appears to have survived the fire.

Hoping to get back to a more regular and predictable posting schedule soon — after I do some household and blog catchup.

What have you been up to?