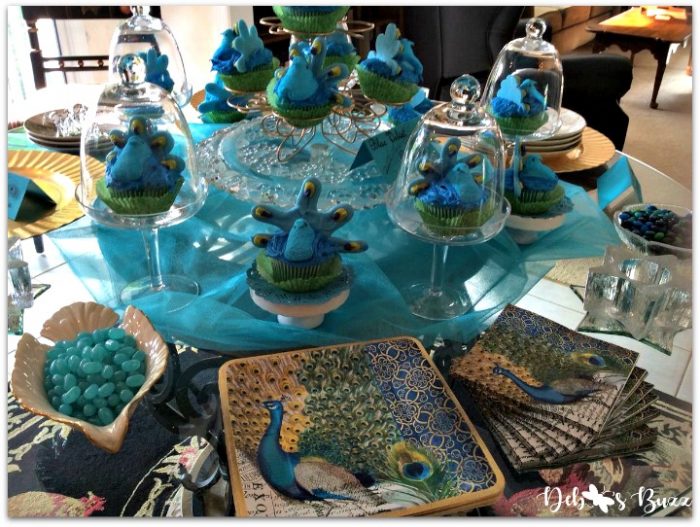 It was challenging putting together a peacock theme menu for the second My Favorite Things Party (MFTP).

I mean, I wasn’t exactly going to serve peacock right? 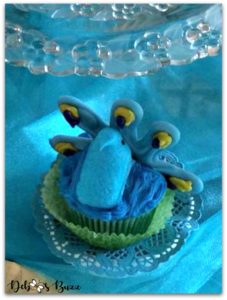 The first MFTP menu, Bee Theme Party Food Features Honey, Lemon, was only difficult in terms of narrowing the list of recipes. I also limited that menu to appetizers and desserts. It was a Sunday afternoon party, not an evening meal.

Birds of a Feather, Gather Together was a Friday, girls night out party. That meant serving cocktails, appetizers, dinner, and dessert. Undaunted, the Queen of Theme was up for the challenge!

First, I looked for foods and beverages in beautiful jewel tone colors. Then, I added serving presentations that resemble a peacock’s open fan of feathers. The result was a peacock theme menu that tasted as good as it looked.

Like the first party, I provided all the food. Some MVTP’s ask guests to contribute to the party food by bringing a favorite. Friday night meant a number of the ladies were coming straight from work, and I didn’t want them to worry about preparing or transporting food. Read the basics and my tips at, How to Host an Extraordinary My Favorite Things Party (Part I).

So, I went to Pinterest in search of peacock theme menu ideas, and combined it with some of my favorite flavors, foods and beverages. 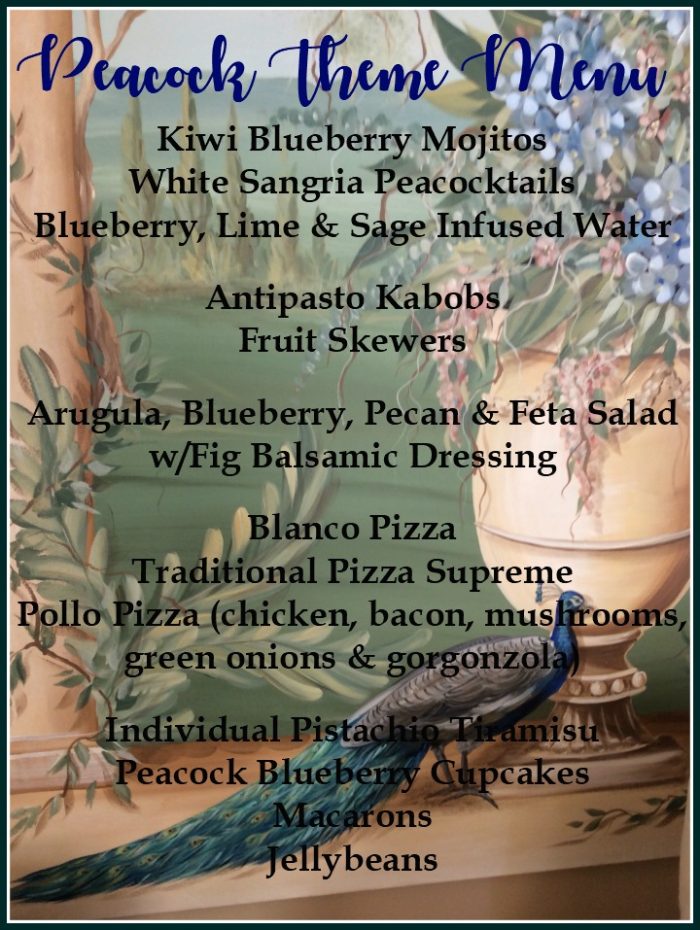 Do you like the painting  in the background of the peacock theme menu? It’s actually the center of a three-panel mural hanging in the living room. The mural is one of my favorite things — and part of a collection of peacock décor and tableware. It’s this peacock passion of mine that fueled the party theme choice.

Peacocktails Get the Party Started 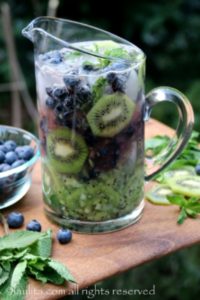 This was an easy choice. I love mojitos. Aww that lime and mint with a kick!

How incredibly gorgeous is this creation by Laylita’s Recipes? Layla didn’t conjure this drink for a peacock theme menu, but for a Super Bowl party, as a 12th Man Seahawks inspired cocktail.

It’s an incredible, refreshing beverage. Layla’s recipe is easy to follow. The mint is muddled and soaked ahead of time.

I also froze ice cubes in a tray, filling them with blueberries. Right before the party, I added the refrigerated sparkling water and rum to pitchers. 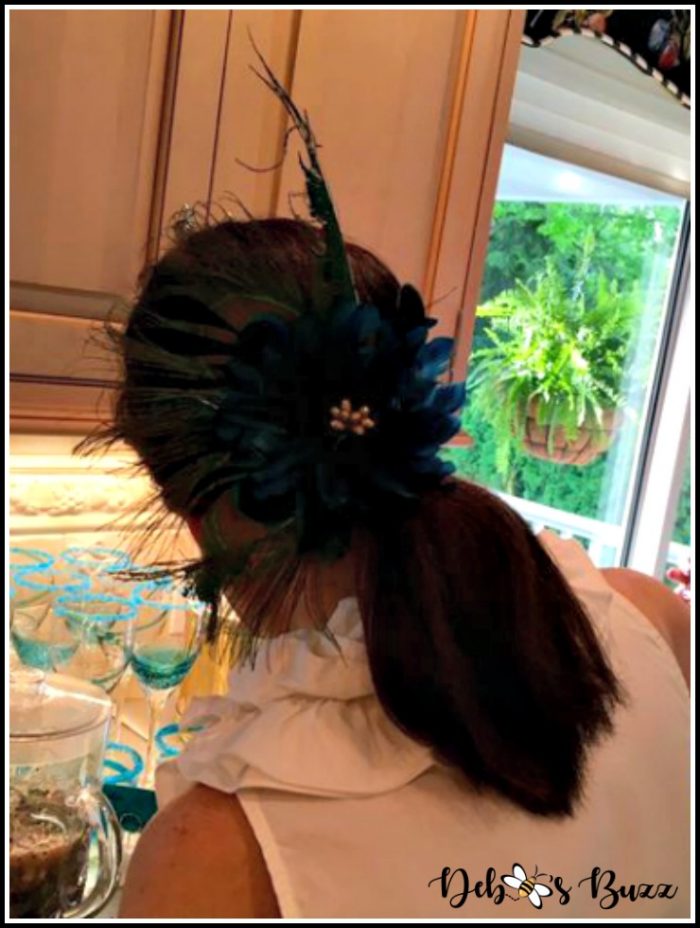 Here I am serving up Kiwi Blueberry Mojitos for the ladies out on the porch. Does the hair clip look familiar? It was a duplicate of one of the prizes for “Favorite Fashion” later that evening (Peacock Party Favors, Gifts and Prizes). 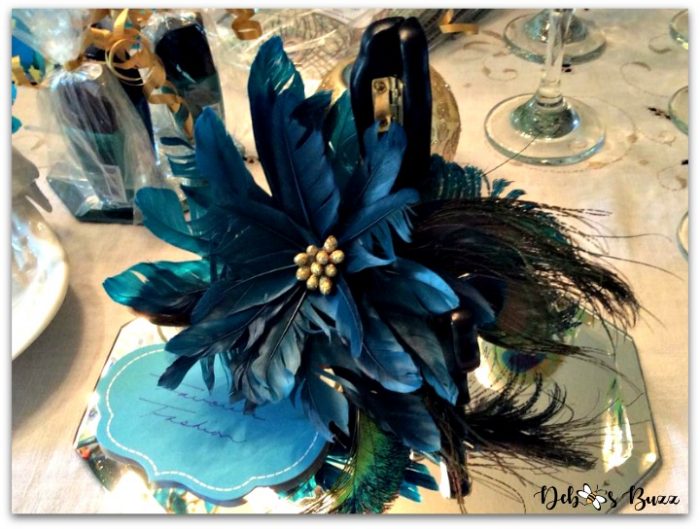 I served the mojito peacocktails in teal accented glasses that are part of my tableware collection, featured in Exotic Peacock Tablescape Graces Formal Dining Room. 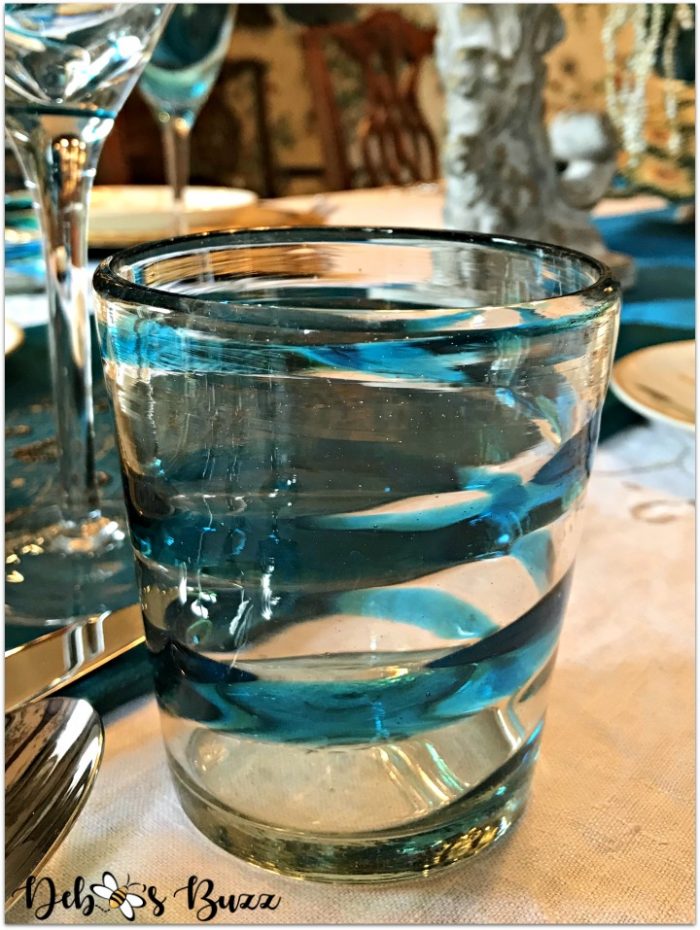 The rims were moistened with lime and dipped in blue sugar crystals. 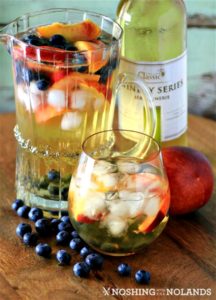 Because not everyone likes an alcoholic cocktail or prefers wine, I also made pitchers of a white sangria.

I took the blueberry peach sangria recipe by Noshing with the Nolands and tweaked it, by adding peacock green apples.

As described online, the Pinot Grigio sangria is “light and fruity, cold and slightly sweet.”

The sangria was served in the peacock feather goblets I hand-painted in Peacock Party Favors, Gifts and Prizes. 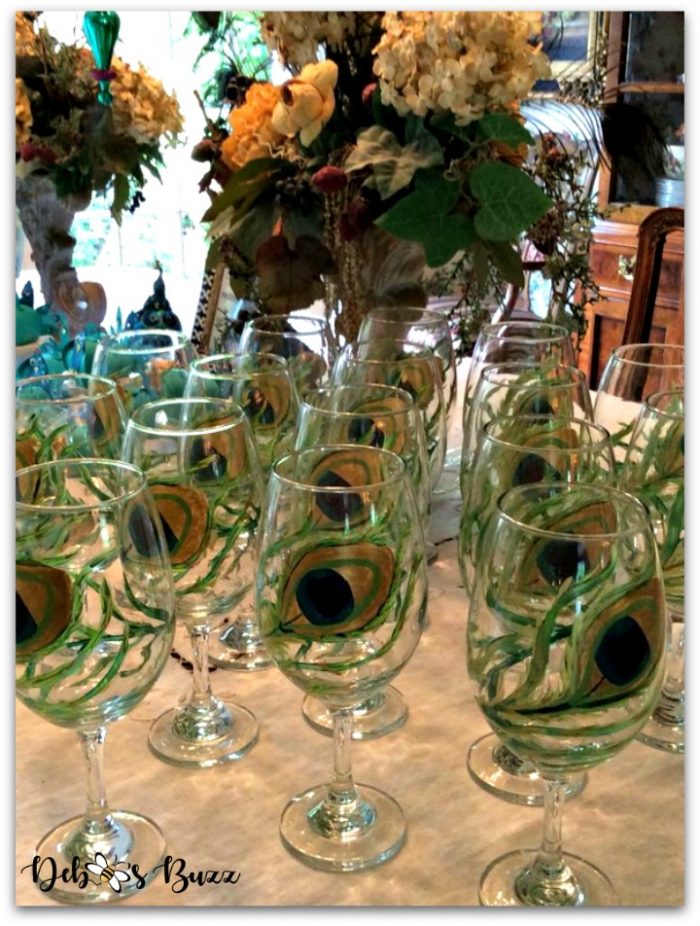 It’s always good to offer water to guests at gatherings. Plus, a few of my friends don’t drink alcohol. Others had long rides home later that evening. Most drank both peacocktails and infused water throughout the party.

I found a collection of over 20 infused water combinations at Nutrition Stripped.  For the peacock theme menu, I chose the blueberry, lime and sage recipe for the mix of jewel tones and flavors. The sage came straight from my garden. In order to amp up the flavoring, I steeped some of the herb in boiling water, rather than just muddling and soaking it overnight. Steeping the sage creates a delicious aroma in the kitchen!

Like the peacocktails, the infused water was beautiful to look, served from a large dispenser with lime slices. Ice cubes, studded with blueberries, were made ahead.

Appetizers, Salads on a Stick

Unfortunately, I don’t have many pictures of the finished peacock theme menu. Food photography wasn’t much of a priority then, because I wasn’t a blogger two years ago. And, I had my hands full playing hostess. 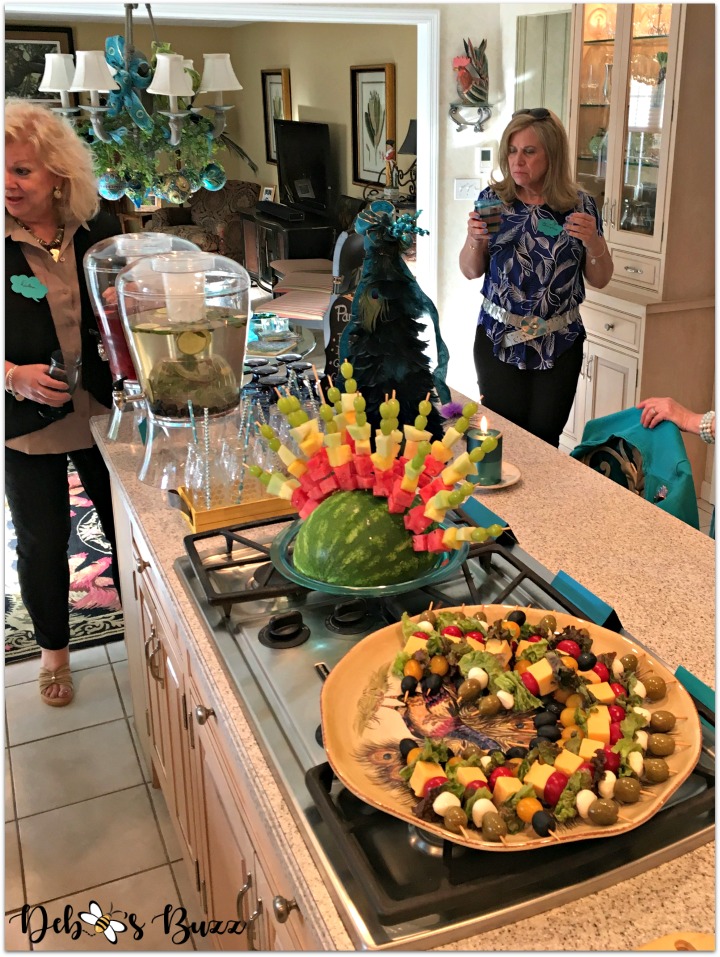 It’s wasn’t until the Breakfast at Tiffany’s and Alice in Wonderland theme parties that my sister and college bestie traveled from out-of-town. They provided tremendous help in the kitchen before, during and after those parties, freeing me to spend more time with my guests and taking pictures.

With the antipasto and fresh fruit, I tied into the theme by displaying them as peacock tail feathers. The antipasto ingredients were threaded on short wooden skewers. 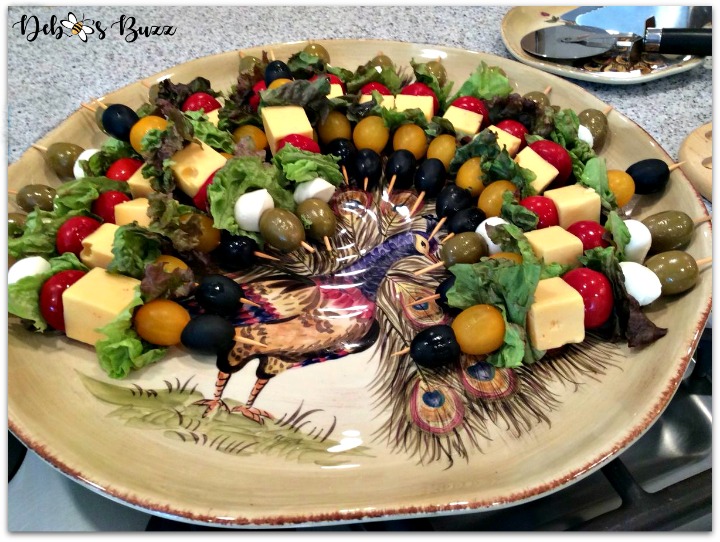 The large peacock platter is from Macy’s, a number of years ago. I think its made by Tabletops Unlimited? The pattern is Peacock, from a hand-painted collection. Not the best picture, but it’s the only one I have.

I found many watermelons intricately carved and embellished as peacocks on Pinterest. That was a time-intensive project I felt exceeded my abilities. Instead, I took this very simple approach. 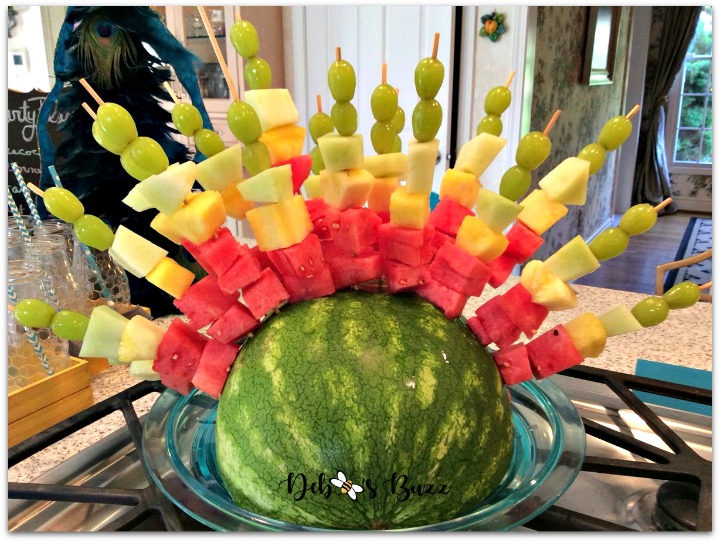 All I did was thread melon and pineapple cubes onto long wooden skewers. I intended the large green grapes to appear as the “eye” in a peacock feather. Can you see it?

Maybe it was the effect of the peacocktails, but the ladies seemed impressed by my “artistic” displays as they nibbled on the antipasto kabobs and fruit skewers.

My very favorite pizza on the planet is called Pollo, a creation of our local Bados Pizza Grill & Ale House. Part of Bado’s gourmet offerings, Sicilian style Pollo is a white sauce pizza, topped with chicken, bacon, mushrooms, green onions and gorgonzola cheese. Yum! If you read Bee Theme Party Food, you know I adore blue cheese. Trust me on this, Pollo is like a slice of heaven!

But, not everyone’s slice of heaven is the same. For instance, hubby’s first choice is Hawaiian with pineapple, ham and spinach. What’s your favorite kind of pizza topping(s)? 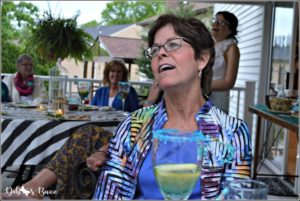 Everyone shares their favorite thing between dinner and dessert.

To account for a variety of tastes and preferences, I also selected two other “safer” kinds of pizzas:

I also wanted to mix up the crusts; Pollo was on thick Sicilian, Bianco on thin, and Traditional on well, traditional crust! Other than when eating Pollo pan style, my favorite is usually thin. What ruffles your feathers?

Bados was nice enough to deliver the five pizzas right on the dot, leaving the carrier bag behind to keep them all hot. I simply left the carrier at the front door and a delivery person picked it up later that night. I spread out the three varieties on the kitchen island and kept the duplicates warm in the oven.

Well, the Pollo pizza disappeared in a snap! No leftovers for Debbee.

Yeah, I Know, Lots of Blueberries… 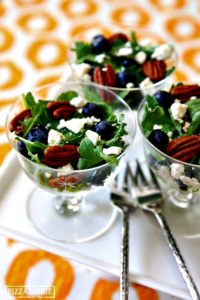 Sorry, I have no pictures of the delicious pizzas for you to salivate over. But, I do have a Pizzazzerie shot of their fantastic salad.

The arugula, blueberry, Feta and toasted pecan salad is vegetarian and gluten free, if that matters.

I used a bottled, fig balsamic dressing that caused universal raves from guests. The sweetness of the fig (another favorite of yours truly) paired nicely with the bitterness of the arugula.

Pizzazzerie suggests serving the salad in small, individual dishes so that the toppings all don’t end up at the bottom. I opted for a large bowl anyway, and was careful to make sure the salad ingredients were distributed throughout. The dressing was left to the side. 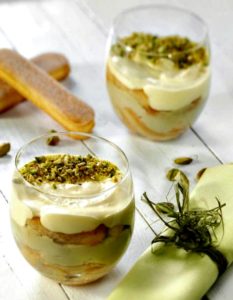 At the French Queen Party, I had individual limoncello tiramisu’s the ladies really seemed to enjoy. Since it was so successful, I searched for another twist on the traditional tiramisu dessert, to compliment the peacock theme menu.

The lovely green shade and the fact that I’m crazy about pistachios made this one a winner! The pistachio tiramisu recipe is from Matilde Vincenzi, an Italian fine pastry company. They claim to make the best ladyfingers in Italy — home of the tiramisu.

Vincenzi rates the recipe as easy, but I “cheated” to make it even simpler. Instead of making the pistachio cream from scratch, I used a pistachio pudding mix! After it had set, I stirred in chilled coffee.

The tiramisu was assembled in the same footed, plastic parfaits I used the previous year. Find them five for $1 at Dollar Tree.

I layered the pistachio cream with ladyfingers sprinkled with Amaretto liquor, and topped each parfait with chopped pistachios and a few — you guessed it — blueberries!

Peacock Cupcakes for My Peeps

I had made a delicious honey cupcake from scratch the previous year, decorating it as bee hive inside a flower. The adorable cupcake also served as a 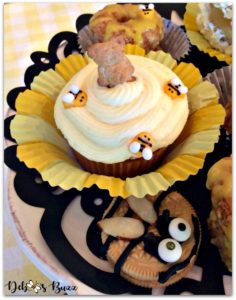 For the peacock theme menu, I wanted to create a signature cupcake that resembled a peacock.

I found a number of really cute ideas on Pinterest. Check them out on my board, Party: Peacock Theme under Food & Beverages.

And, since I am always planning the party a year in advance, I bought up several packages of blue Peeps at Eastertime.

And guess what, they’re blueberry flavored! 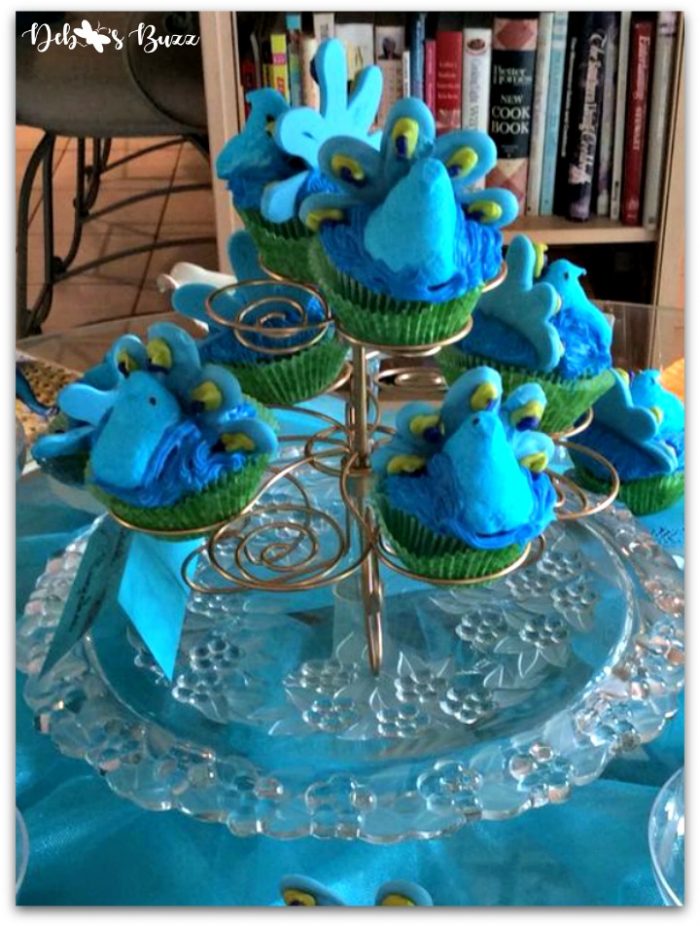 The tails are easy to pipe out of Wilton candy melts. First, spread a sheet of waxed paper on top of a cookie sheet. I free-handed the piping. If you want, you could draw a template of the peacock tail feather. Place the template underneath the waxed paper and trace it in candy. 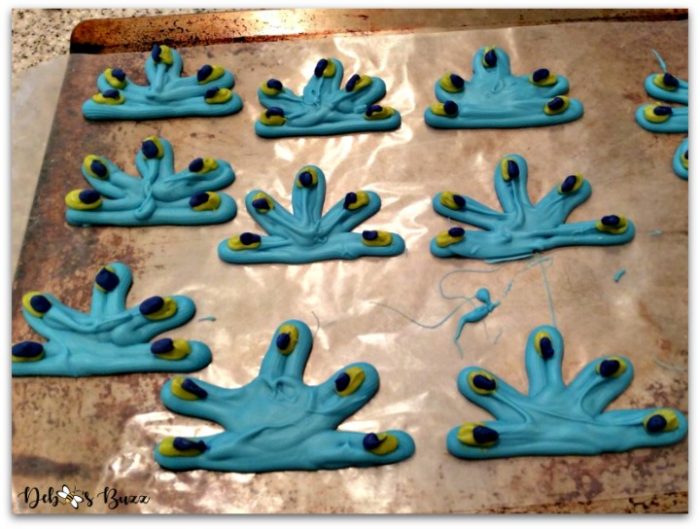 I had never worked with candy melts before, but making the tail feathers was quick and easy.

Just melt the candy in the microwave. I then inserted a frosting tip into the corner of a freezer bag, and piped the candy onto the cookie sheet. Two other colors were used to embellish the eye of the feathers. Easy peasy! The candy tail feathers can be made well in advance and stored in an airtight tin. 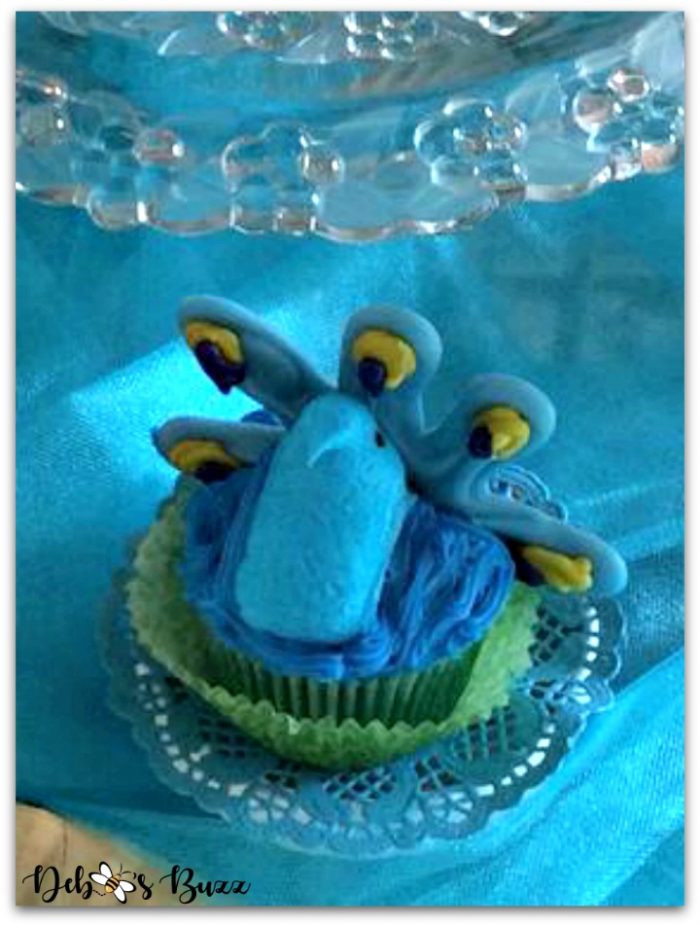 To assemble, simply pipe or spread frosting on the top of each cupcake. The frosting acts as “glue” to hold the head and candy feathers in place. For the tail feathers, I used a knife to make a little ridge in each cupcake. Finally, pipe around the tail feather fan to secure it upright. What do you think, isn’t he cute?

One last confession, I used a boxed mix and canned icing to make the peacock cupcakes. When I saw the packages in the store, I decided to take the easy route. They tasted just fine, but left a lot of blue tongues in their wake LOL! 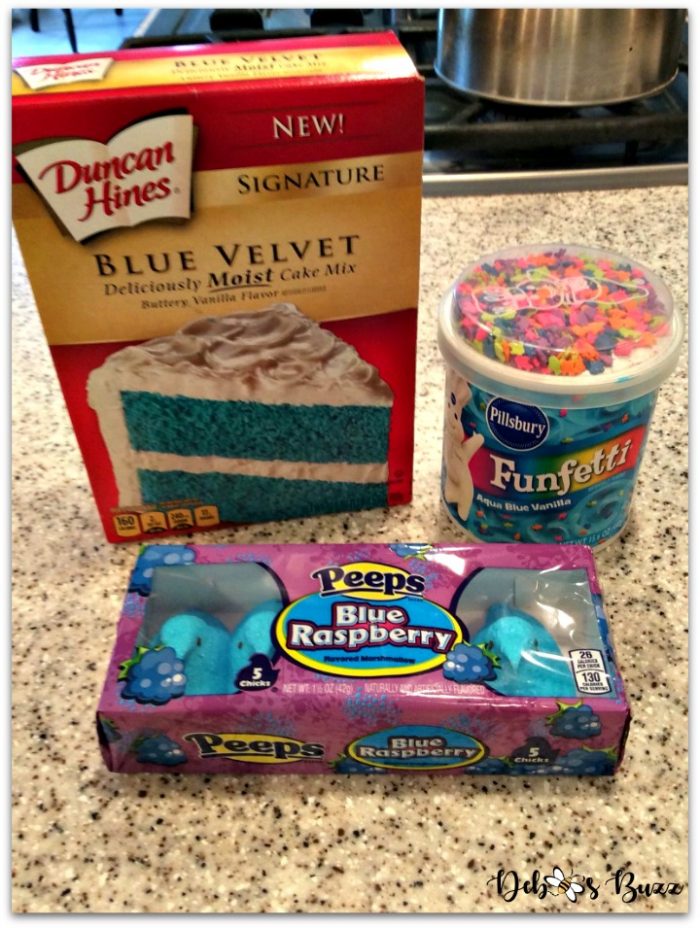 Birds of a Feather, Gather Together on various cupcake stands in the center of the dessert table. 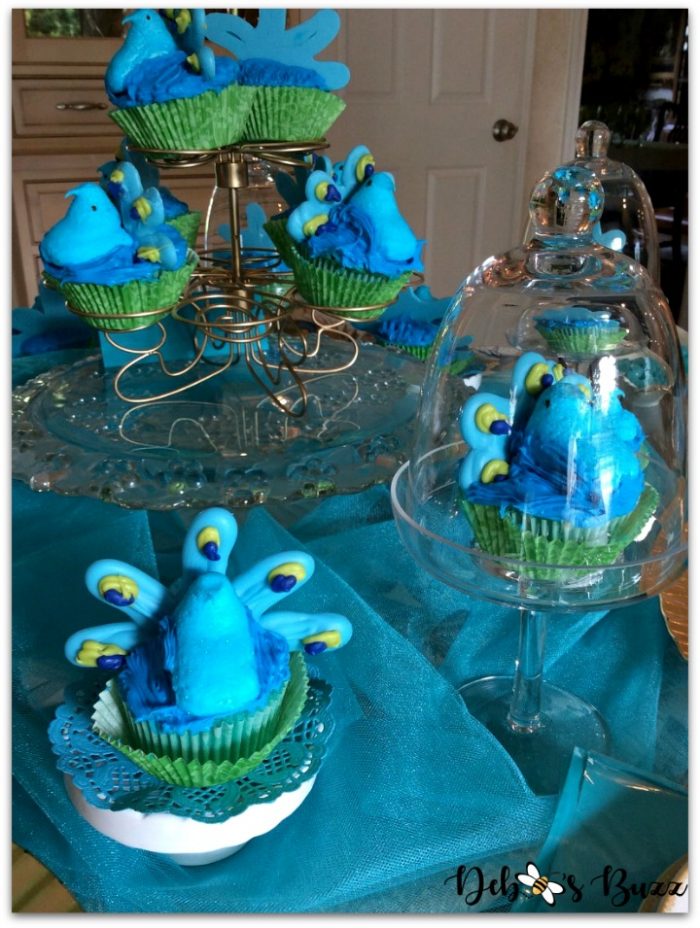 Schools Out for Summer

Over the summer, I’ll likely be posting a little less frequently. Like many of you, we have plans to take some time off, travel and spend time with family and friends.